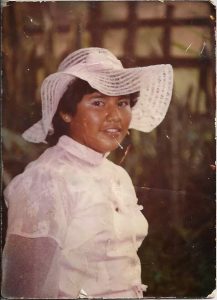 My mother when she was 15, at her Quinceñeara.

To this day, I’m traumatized by the word “run.” Who wouldn’t be? It’s all I did while crossing the border and it was the only thing that kept me from being sent back. I will never forget the long cold nights where we spent hours running. It was as if we were playing a game, and the only way to win was to run and never stop. It was a blessing and a curse.

As a child, I was well behaved. I didn’t have much of a childhood; I grew up faster than I should have. When I was little, I would always help my mom sell refrescos on the weekends. I remember helping my dad lift the cart we would use. It was a job for men, but of course I did it, because they always relied on me. I was never lazy even though I was the youngest of them all. Sometimes, I would even sell refrescos, juices, at school, to try to earn money for my mom and help her pay the rent. One day I got in trouble by a teacher who saw me carrying a sack of bottles. I had to explain to her why I had so many bottles with me, and I had to promise to not bring them to school anymore. I was sad that I couldn’t help my mom anymore but she understood. My family was poor, but always happy.

We lived in a small crowded apartment with all six of my brothers and my sister, even some of my cousins. Me, my brothers, and sister would always play outside without a care in the world. Of course that was before there were maras, gangs.

When I was there, the governor was untrustworthy and he would lie to his people, resulting in guerillas and rebellions. But now, everywhere you go you see a gang member, it’s very dangerous.

My boyfriend at the time had already departed for the U.S and already had a small apartment over there. He had sent for me to follow him. If it weren’t for my begging, I would’ve stayed in Salvador. A couple months before he left, we were expecting a child, my first child. What am I going to name her? I decided on a name. I was so happy and I knew everything was going to be alright; from then on, I was worry free. Can you imagine the joys of being a mom?

Unfortunately, a few months later, I had a miscarriage. I never understood the pain of a mother losing her child after I lost my beautiful baby girl. I cried for days and I couldn’t believe what was happening to me. Porque diosito mio, porque? Why god, why?

After that, I longed for something more than selling refrescos. I wanted a better life, a better job oppurtunity, and I wanted to start a family in a place where they would prosper. When I told my parents I was leaving, it broke their hearts.
“Porque mija? Si aqui estas feliz.” Why daughter? You’re happy here.
“Ya se mama, pero necesito un buen futuro, y aqui no lo voy a tener,” I replied. I know mom but I need a good future and I’m not going to have it here.

I didn’t want to leave my family behind but I had to make that sacrifice. I knew they were proud of me for being so brave to immigrate alone to U.S.A at the age of 22. They all hoped that I would help bring them to the U.S. and later on I did.

It made me sad, knowing that I was going to miss a lot of things and that I had to leave everything behind and start a new chapter in my life, but I knew I was making the right choice. I said goodbye to all my brothers and sister but I knew that one day, they will also come to the U.S. I would be the first from my family to immigrate.

Adios familia, siempre los tendra en mi corazon, los amo. Goodbye family, I will always have you in my heart, I love you.

I was led through the forests and deserts by a coyote. The hardest part was hearing from la migra, immigration. Every time we would hear them, we would hide. I was always so scared and nervous that I would be caught and sent back. We had to go through deep rivers, dark tunnels and cold forests.

We had to crawl through the side of the freeways near water tunnels and every time we would see a white van all we did was run and we didn’t stop running.

The most painful night was crossing the river. When we first got there, we had to hide in the grass near the water. At the edge of the water, there were vicious crocodiles. It smelled like salt and dirt, and the grass underneath me was wet and cold.
“Cuidado con los cocodrilos!,” somebody whispered, “Careful with the crocodiles!”
All I would hear was the low grumbling and snarling of the crocodiles and it terrified everyone, including me. I felt the need to cry so I did.

We waited for the white vans to leave, and when they did we all raced through the waters infected with creatures. I was soaking wet and when I finally got out of the water we had to run through sand. My feet got heavier and it was harder for me to run. I had to be carried by 2 men because I couldn’t keep going.

We were all loaded into a small truck. There were around 20 guys and 3 girls. There were tons of bodies on top of my aching foot. My foot was numb for 2 hours straight and I was in excruciating pain until I decided to speak out.

“Ayuda! Mi pie! Quitense de mi pie no lo siento!” I screamed. Help! My foot! Get off my foot I can’t feel it! It took 5 men to help everyone get off. I was in so much pain and I felt like giving up right then and there. Porque hice esto? Why did I do this?

I will never forget that night.

After months of crossing the border, we arrived at the U.S.
“Ya llegamos, lo hicimos!” the coyote said. We’re here, we did it! I was so happy, I can’t believe after all I’ve been through I finally arrived. Is this really happening? Am I really here?

I first arrived in Los Angeles. From there, my boyfriend brought me to Redwood City. He provided me with shelter and some food. He didn’t treat me well, he would constantly disrespect me but there was nothing I could do, he was the only one caring for me. So I had to stay with him.

I also went to adult school in order to learn English. It was hard for me to fit in without knowing English. I would struggle at work and in public, can you imagine how embarrassing that is?

Soon enough, my boyfriend was fed up with me. I wasn’t making enough money for him. He said I was unable to pay for the rent and kicked me out into the streets. I didn’t know anybody and I had nowhere to go. Ay dios mio, donde me voy a ir? Oh my god, where am I going to go?

I was alone for a month until the father of my kids was generous enough to take me in. He was only renting out a living room but it was better than nothing. Soon enough, we grew a family. I was happy with him and things were looking good so far.

I was glad that I had come to the U.S. I couldn’t be happier, knowing that my family would soon join me.

Today in 2018, I have made a major growth since the beginning. I have a good paying job, 3 kids, and a house of my own.

I have come a long way and I have suffered so much to get to where I am. I hope my kids see the amount of suffering I have gone through in order to make sure that their futures are secure.

I believe the experiences I went through have shaped the strong female I am today, and I hope I can set a great example to my kids.

The greatest lesson I have learned is to always fight for your dreams and never give up. The achievements I have today are because of the great suffering that I went through and I couldn’t be more proud of who I am .

This story of an immigrant from El Salvador was written and recorded by her daughter.