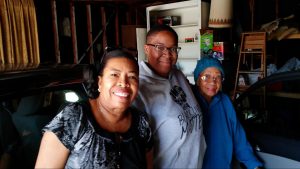 Laurain (on the left) enjoying time spent with her relatives who live in Menlo Park.

“The greatest nations are defined by how they treat their weakest inhabitants” – Jorge Ramos. It was just another warm summer’s night in 1965 for most people but in my case it marked a untouched official start to a new chapter in my young 16 year old life that I wouldn’t change for the world but know it’s time to reflect on my past and where I came from. In my homeland of Nicaragua in Central America we didn’t have anything to be proud of except for our growing family. My family’s house had only two rooms, a living room and one bedroom which had to house six different people at once. Also, the bathroom and kitchen area was located outside so that meant only one person at a time could use these regular house appliances. After sixteen years of living under these conditions, my mom faced the hardest decision ever, go to America and seek out a better life for everyone or stay put and she decided it was best to leave. Even though family and friends were momentarily filled with grief, they too saw the bigger picture and were happy for us and wished us luck in our fresh start in the U.S. I was never so excited to move in my life. I saw America as a place where anyone can accomplish their dreams because that’s how this country is portrayed.

When I got off the first plane in L.A.X., the array of beautiful lights set up throughout the airport added to my excitement of America and made me even more anxious for the other plane to arrive in San Francisco which all together took about seven and a half hours. Once we got settled in America at my grandparents house in Menlo Park, I had to start getting used to the new culture, for example, learn English, adjust to the advanced type of curriculum taught in High Schools from the United States. My mom sat me down at the dinner table and said these famous words that drove me onto success “ Do whatever it takes to do well in school because it’s the key to success”. After this talk, my mindset became very determined and I told myself out loud  that “ I was able to do anything, I am able to get a job, I’m able to go to college, I’m able to achieve the American Dream no matter what people do to try and put me down in the dirt ”.

After I successfully graduated High School, I went to the University of Miami to major in Business and a minor in commercial arts because my dream was to work in the fashion industry which I ended up doing for 20 years with Melville Shoe Corp until I had to start caring for my 2 young sons, but before I had accomplished many of my dreams, I of course had to face some adversity because of the color of my skin. One time I was applying for a job where I talked to the manager on the phone before coming in for the in-person interview and when I got to the store, the manager said “ You sounded taller over the phone “ which caused me to viciously reply “HOW COULD I POSSIBLY SOUND TALLER OVER THE PHONE?” and after a little back and forth argument, they sent me packing saying “ You’ll never be able to get a job and be successful” and boy did I prove her wrong.

After a couple of unsuccessful tries at trying to get a job after my graduation at Miami, I managed to land a job at Melville Shoe Corp which I saw as a chance at achieving one of my dreams since I was a little kid because I always loved everything about fashion. When I first started as an assistant, I got put into this six month training program which would eventually allow me to move up the ranks of positions until I reached the title of Training Manager which meant traveling around the U.S. to observe how the other stations of the company are progressing which meant constantly being on the road and away from my husband but that didn’t stop me from trying my best at work.

After my first child was born, I took a two year leave off of the job to take care of my son and then went back to work until my second son was born which is where I made the decision that it was best for me to stop working to take full care of my 2 children. Once they got older, I started to think about what I was gonna do for the rest of my life. That’s when I decided that I wanted to challenge myself and partake in a new career: education. So after a while of researching and educating myself on how to become a secretary, I finally got the position at James Rutter Middle School in Sacramento and ended up working there for another 20 years. It was also around this time that my family and I moved to Sacramento from Menlo Park to make my job more accessible to get.

After reflecting on all my new beginning of life for me in America, I’ve been so fortunate to make my version of the American Dream. I was able to have the best family possible with a spectacular house where we have family gatherings with relatives which is the best feeling in the world. In addition, I was able to have a dream job and rise up through the ranks with time and dedication after my amazing college education at Miami. I miss my friends and family that are still in Nicaragua and I want to start traveling more to my homeland and help people establish themselves in America so they can have the same experience. America and Immigration are very controversial subjects nowadays with Trump as president and the situation surrounding the DACA program and The Wall. Since I was blessed enough to lived the life I lived, I want to give everyone that same opportunity no matter where they come from, I mean after all the only people who didn’t immigrate to America is the Native Americans. This is why I partake in a church program which allows me to help immigrants find jobs and affordable housing so they can one day make dreams a reality.

The interview and story of Laurain Fonseca was done by her nephew, Derek Mohn.