A Dual Citizen’s Life of Family, Freedoms, and Change (India) 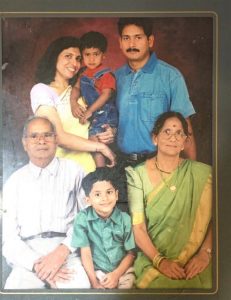 Vimala, bottom right, pictured in a family portrait with her husband, son, daughter-in-law, and two grandsons.

At age 81, Vimala Vajjhala (maiden name Bhagavatula) has experienced the wonders and difficulties of two vastly different nations, living as a dual citizen of India and the United States. Brought up in a small village called Bobbili in South India, Vimala described a simple but enjoyable life. (6 sisters, 1 brother)  Her family impressed social values of obedience, work, and discipline, cultural norms that she sees as quite different from life in America. On special occasions and for summer vacations, the entire family, all of her three uncles, one aunt, and over a dozen cousins would congregate and socialize in a festive manner. They celebrated major religious holidays including Dasara, Pongal, and Diwali, when the whole house was transformed by lit lamps and rangoli, mandala designs drawn in rice flour on the dirt that lay at the front of the home. These were the times that brought the most joy.

Vimala was born on July 1, 1939, when Great Britain still held political control of India and subjected the country to its imperial rule. She recalled the at-odds position of her father, who worked for the British government as a train-master, a public service job, but supported the Indian independence movement led by Mahatma Gandhi. In the mid-1900s, political revolution seized the hearts and minds of Indians, manifesting through large-scale nonviolent protests and mass boycotts of British goods. Vimala’s household also participated, abstaining from purchasing British cloth. Instead, they wore simply-fashioned garments made by the family spinning and weaving their own cloth.

As a child, she remembers British imperialism as dark days, constantly feeling under “threat” and “fear” of the nation’s subjugation of Indian people. The government rationed essential items such as sugar and clothes, creating scarcity of goods, and restricted personal liberties, arresting and jailing individuals for protesting or rioting.

“We were very small children but still we could feel the impact of that subordination,” Vimala said.

After India officially gained independence in 1947, she described freedom and the access to goods as dramatically changing her life in India.

Another momentous change came at the young age of 19, when her father arranged for her marriage to Vidyanidhi Vajjhala. She had just nearly completed her final year of college, with a Bachelor of Arts in economics and political science. Her father and a close friend of his, who both reconnected while as guests at a wedding, saw the opportunity to marry their daughter and son. Without much speaking, they were introduced to one another, agreed to the marriage, and so became engaged.

Together, they moved to the city Visakhapatnam in Andhra Pradesh to start their married life. Her husband, who obtained a PhD in thermodynamics, went on to teach mathematics at Andhra University College of Engineering, as she raised three children, one boy and two girls.

As the children grew up and completed their education, one by one they came to America for a masters degree.

Growing up, Vimala knew little about the United States but still deeply associated the country with the idea of the “American Dream,” of endless and bountiful opportunities, jobs, and freedoms. In 1983, she visited her brother-in-law, who lived in New Jersey. He encouraged them to move to the United States and sponsored their immigration. After several years of processing, they immigrated in 1995, following their three children. Here, Vimala and her husband lived in Arizona for four years before moving to California.

While at times she admits to feeling a sense of “loneliness” in the United States, missing the crowds and cultural comforts of her home country, she greatly appreciates several aspects of American life. Living in the United States, she has experienced the expansion of her role in society beyond the limited gender roles of India in the 20th century. No longer just a “housewife,” she fills her hours with volunteer work, serving in community centers as a companion to seniors, and enjoying her hobby of gardening thanks to the California weather. 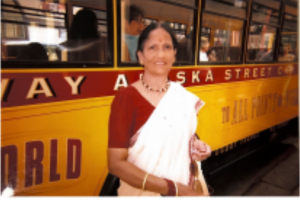 Posing in front of a street car in Alaska.

Over the years, immigrating has also meant assimilating into American culture to some extent. She has held onto many of her religious and cultural customs – wearing Indian saris, a silk garment, following a vegetarian diet, and doing “pooja” – prayer to the gods – every morning. However, Vimala has also embraced parts of the culture and society, celebrating Thanksgiving and Christmas, watching Wheel of Fortune and American television, and voting in every election.

When every now and then she visits her home country, she described observing incredible change. India has redeveloped itself through urbanization, industrialization, and technological advancement to the point of nonrecognition at times, she said. Going back to Visakhapatnam, she no longer knew her home. While she may have trouble distinguishing where homes used to be in the place of today’s skyscrapers, she still feels that sense of belonging when with her “people.” Vimala described instantly connecting with her relatives and friends, even if it’s been five or six years since the last visit.

Coyly, Vimala sidestepped putting a label on her cultural and national identity when asked if she thinks of herself as an “American, “Indian,” or both.

“I’m a human being, that’s all,” Vimala said. “There are only people. There are no Americans; there are no Indians. All are human beings, and that is what America teaches you … If you have that ability to think, first comes the human being, then comes the race, nationality, philosophy, or religion. Anything comes after [humanity] only.”

The interview and narrative were done by Vimala’s granddaughter, Nisha Malley, a student at Foothill Community College in Los Altos, CA.