A Dreamer from Hong Kong

My uncle is a dreamer. He came to the U.S. for his education and had a hope to settle in the U.S. He came from Hong Kong, a world city in China. It’s really crowded and extremely different from the U.S. He first came to the U.S. in 2001, at the age of the beginning of his undergraduate school. He studied in University of Wisconsin, in Wisconsin, a beautiful state near Great Lakes.

When his application was fully completed, he was ready and carried his suitcase to make his dream come true. His major was Accounting and Finance, decided by both his parents and himself. After arriving, he chose to live in school dormitory, because it’s cheaper and better to make more friends. From his friends, he learned a lot about different cultures and had fun with them. By the way, although they have already graduated for a decade, they still keep in touch with each other and meet once in a while. Not only because of friends, another reason to choose living in dormitory was due to the convenience. For example, if he wanted to buy eggs for dinner, he only needed ten minutes to buy it in Hong Kong; however, he needed forty minutes in Wisconsin. In this situation,  he learned to consider things more perfectly that he wouldn’t miss anything he needed in week when he drove for half an hour. He said that people living in Wisconsin tend to be slower than in the city; their paces of life are more relaxed and at ease. In addition, there is far more entertainment in Hong Kong than in Wisconsin. The only three things he could do at night were study, study, and study!

The classmates there were really friendly and he also attended many clubs and organizations. Once, the college hosted an international dinner with another college nearby, which was my aunt’s school. There, he met his future wife. They soon had crushes on each other and started dating. Unfortunately, he used a student visa, so he had to go back to Hong Kong, for he didn’t find a job in time. His first job in Hong Kong was a nice job, at Hong Kong City Bank. Although it was great, he still wanted to go back to the U.S. After few years, he and my aunt got married. He became a permanent citizen in the U.S. However, he still couldn’t find a job because the accounting area is extremely competitive. The time after moving here wasn’t easy for him. He just made a huge decision, moving to the U.S., and had no chances to move backward. It was the biggest challenge in his life. Fortunately, he had good friends and his former employers also helped him a lot; he went through his low tide soon. Afterwards, he got a new and perfect job which is related to Public Accounting and the cute baby, named Kaela, was born.

After one year, the second baby, named Adaim, was born. He has wonderful family members and everything is good now. He thinks these family members are the best gifts from God. During these years in the U.S., there is one really ridiculous thing he still remembers, that sometimes, a gallon of milk is even more expensive than a gallon of gasoline! Although he fits well now, he is eager to meet his parents. He hasn’t met them for a while due to his two babies and job. So, his new year hope is to have a family gathering with his parents this year! 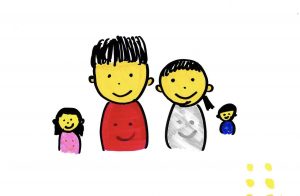 a photograph I drew of the family.

The story of Ronald Siu was written and recorded by his niece, Nicole Huang.