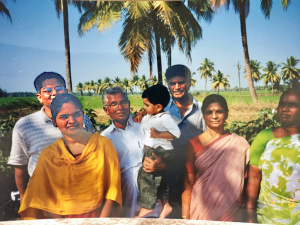 From left to right: my father, my aunt, my grandfather holding my brother, my uncle, my grandmother, and my great-aunt.

It was 1 am, April 1989 when my father landed in Detroit. Born in a small Indian village about an hour from the coast, the first thing that stood out was the weather–it was bitterly cold. Luckily, it wasn’t too long before a friend of a friend, also an immigrant from the same area, came by to pick him and his friend Shankar up.

It was Shankar that had brought up the idea in the first place. My father, the son of a farming magnate, had grown up in the fields surrounding the village, working with the hired laborers. He spent so much time tending to the land it became even more than routine; he’d wake at the crack of dawn and be halfway out the door before he even realized what he was doing. Unfortunately, this meant his education suffered; he’d only return to school at the end of the harvesting season, around late fall, and as a result find himself lagging behind his peers– especially in math, which proved a hard pill for him to swallow, as his father, my grandfather, was the first in our town to get an MS (in advanced mathematics, no less). Undeterred, he left the village at around 18 to pursue engineering, but returned to farming after he got his degree, in 1985.

However, he soon began to look for some sort of change, a new direction in his life. Shankar had mentioned he would be moving to the US to get a master’s degree–my father decided that was exactly the sort of new adventure he was looking for, and in April of 1989, he landed in Detroit to pursue his master’s degree in nearby Wayne State University.

There are a few major differences between the Indian and American education systems, but one of the most important is the breadth and depth of each. Indian schooling is extremely broad but fairly surface-level; in contrast, American schooling tends to focus on a specific area and goes extremely in-depth. This, along with my father’s expectations of the school being as laid back and relaxed as the brochures implied, led to a few mishaps–but each time, he bounced back, working harder and doing better than before.

After receiving his MS in civil engineering in 1993, my father entered the workforce and moved to Northville, Michigan. Around this time he got married to my mother, who was pursuing her DDS at the University of Detroit Mercy hospital. However, in 1996, my mother moved to Boston to specialize in orthodontics at the Harvard Dental School, and my father began to get bored of civil engineering. Once again, he decided it was time for a change –  this time to the more “glamorous” field of IT consulting. He taught himself to code and soon traveled all over the East coast, working in Michigan, Boston, Mississippi, and Florida. He moved back to Massachusetts as my mother was finishing up her specialization, and my brother was born in Boston. In 2000, they moved to Michigan, where I was born, but then moved two years later to California, where we have lived for fourteen years.

Currently, my father works for the state government as an IT consultant; in his free time, he goes on road trips to national parks with the family and watches the latest martial arts movies. Every year, he runs in marathons all over the country with his friends from college (so far, he’s completed eleven and counting). My father is still an avid risk-taker, and of course always ready for an adventure.

This interview and narrative was done by Shiva’s daughter, a volunteer writer for Made Into America.