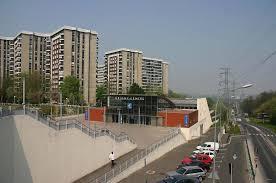 This story is based on the real life of Elizabeth Radigoy. She immigrated from France to the US in 1990 because of a job opportunity.

In the midst of the Caribbean Sea sits an island, its volcanic peaks surrounded by lush vegetation speckled with houses. A young girl made her way to the river, a basket full of laundry balanced carefully on her head. Waiting for her was her grandmother, who was already washing her share of clothes in the rushing water. Both the girl and her grandmother shared the same dark brown skin, frizzy hair and laughing eyes. Pounding the clothes against the wet rocks, the old woman set them to dry in the baking sun. She turned and smiled at the little girl. Five year old Elizabeth Radigoy returned the smile brightly, and sat beside her grandmother. She stared through the rippled water, gazing at the crayfish dancing at the river bottom. Elizabeth had lived on Martinique with her grandmother her whole life, and was used to the blue sky, and the humidity, and even the mosquitoes, which she hated. Her grandmother pointed at the basket, and Elizabeth pulled her attention away from the crayfish and began her work.

Moments later, racing towards them, an older girl called,“Elizabeth!” She slowed to a stop by the bank of the river. “Elizabeth, we’re moving.” Moving? Where? Why? She later learned that she was to join her parents and seven siblings in mainland France. Soon after, a woman she didn’t recognize arrived in Martinique to pick her up. It was her mother. Elizabeth hid behind her grandmother’s skirt.

Paris. The capital of France. Elizabeth had never been there. All she had ever known was the bright, colorful island of Martinique. The smiles of the people in the marketplace as they greeted each other, the winding shady paths, the birds, the river. In Paris she was greeted by unfamiliar gray cement, gray sky, and gray streets bitingly cold. Her grandmother didn’t move to Paris with them. She stayed behind on the island, living just as she always had. She was home. Elizabeth was not. Elizabeth thought a lot about the island. Looking back, maybe the mosquitoes weren’t so bad, and neither was the humidity. She was glad to be able to live with her parents and siblings, but she wished that she didn’t have to leave everything she knew behind.

Gradually, she grew accustomed to Paris. She became used to wearing shoes and a warm coat, she went to school, she made friends, and soon she even made her peace with gray skies, busy streets and the snow that fell in winter. She even learned to ski. And she became accustomed to the fact that people here didn’t smile much. Not as much as she thought they should, at least. Still, she carried her grandmother’s smile with her each day as she ventured through what remained, for her, a place that never quite felt like home.

One particularly dreary gray day many years later, Elizabeth was working at a social security office. For two years she had been working at the front desk, faced with a seemingly endless procession of grumpy and often ill-mannered people. They complained about missing checks and reduced benefits. They argued, and sometimes all they did was glare before stalking off towards the exit. Sitting at her desk, Elizabeth tuned out an especially irritated customer. She watched him duly, nodding every once in a while as he continued his tirade. Closing her eyes for a second, she was washed away by memories of the island, her grandmother, the river, the flowers, the blue sky and the tropical sea, a beautiful shade of green. She hadn’t thought of the island for a long time, and hadn’t seen it for longer. She wondered if she should go back someday. If it was still the way she remembered it. The customer’s face began to turn a distinct shade of red. No, it couldn’t be…Elizabeth remembered now that someone who’d visited them a few years ago said the river had dried up. And besides, everyone there had washing machines now.

After work, she returned to the apartment where she lived with her family. “Elizabeth?” her mother called. Elizabeth hung up her coat. “The lady you babysat for last summer, you know, the American woman? She called, and she wants to know if you would like to go to the U.S. to continue taking care of her daughter.”  America? Elizabeth’s eyes lit up. America was something new, somewhere she’d never been before, and something she’d only ever seen on the other side of a television screen. Suddenly it was as if the dust was wiped off even more memories, memories made after she moved to Paris. Images flooded her mind, images of her father’s favorite American police detective shows that they watched together on TV, of the streets she’d never walked on, and the people she’d never met…The places she’d seen in movies, New York and San Francisco.What would it be like, to live in America? Would it be much different from France? Wherever she was going, it had to be a change for the better from where she was now.

Recognizing the dangerous wonder in her sister’s eyes, Elizabeth’s older sister chimed in. “The U.S? You’re crazy! You don’t want to go there – it’s dangerous! There’s the Ku Klux Klan, racists, guns…anyone could shoot you for something as simple as not liking the way you looked at them.” Elizabeth frowned. Yes, maybe it was dangerous. Certainly not quite as dangerous as her sister described, but Elizabeth had been reminded of another unfortunate consequence. Moving meant leaving behind her home and family. Again. Her brow furrowed as she stared at the floor.

“The American woman wants you to call her tonight. She wants to know if she should buy a ticket for you,” her mother explained. Cop shows, guns…she really didn’t know much about the U.S. at all, did she? What reason did she have to think it would be better? She thought of the angry faces lined up at the social security office. She grimaced. Then she thought of the island.

Even when her bags were packed, even when she said goodbye, even when she was on an airplane halfway across the ocean, Elizabeth wasn’t sure whether she had made the right decision. But this time, at least it had been her decision.

A week later she was riding the bus in Oakland, California, with the little girl she babysat in France not long ago. She nearly made a game of counting all the smiles she saw as the city sped by. So far, at least, everyone had been very kind to her. The bus driver had smiled and asked her questions she couldn’t understand, even with the nine years of English she’d taken in school. She just smiled back. Still, the sky was blue. Maybe it’d be gray someday in winter, but for now it was blue. She delivered the  little girl at school, and then headed to the adult school to sign up for English classes. Soon, she thought, I will be able to understand what these people are saying, and then I can answer them back.

The change of place, despite the difficulty of language, didn’t seem as hard this time.

She missed her family just as she had missed her grandmother, but perhaps this time she had found a place where things could be different. She kept her fingers crossed.

This story is based on an interview by Tesla DeMarinis, a student at Palo Alto High School.