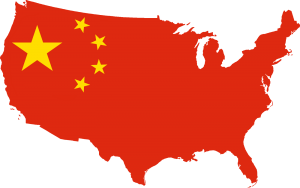 My Mother was born in Shanghai, China. Her childhood was not a particularly good one, at least by American standards, but in China children were taught to be modest and not complain about what they got. My mother lived in a small house with several siblings, cousins, aunts, and uncles. Their house was part of a complex, with multiple other homes connected, and she shared a bathroom with several other families. Growing up in the 60’s and 70’s, my mother was one of many who were fascinated with America. It was referred to as a shining beacon of success where anybody could become whatever they wanted, unlike China’s rather rigid communist system. The civil rights revolution that had also recently occurred in the country only bolstered my Mother’s interest, spurring her to want to visit, and soon live in, the United States.

Obtaining passage to America was no easy task. First, my Mother would have to obtain an exit visa. With the amount of people who wanted to immigrate, exit visas were only given to a select few. To attempt to solve this problem, my grandmother, who now also lives in America, closely monitored the process of obtaining a visa. She would take careful note of who was accepted and who was denied, taking into consideration their appearance, demeanor, and background. By observing countless applicants, my grandmother taught my mother the ways to maximize her chances obtaining a visa. She remembered practicing with the rigor usually reserved for schoolwork as she honed her interviewing skills, and by the time she was finished, she had completely fine-tuned her presentation. Even then, it was lucky that she did.

Next, she had to make the trip. A long, expensive plane flight stood between my mother and America, and her working class family had to save for some time before they could afford it. Travelling this far with little intention of returning for some time was no easy task. Finally she arrived, but found that growing accustomed to American life was just as hard as getting there. My mother remembered a particularly nerve-wracking interaction she had with a shifty street performer on one of her first days in America. The performer challenged unsuspecting tourists to a numbers game, promising money if they won. My mother noticed that the game was mathematically predetermined in the favor of the performer. By close observation, she found a way around his rigged game, and managed to walk away with extra money.

While her initial fascination with America had been purely fanciful at a young age, my mother soon realized the real reason why she wanted to move: education. She had a passion for teaching, and had heard that America was a place where learning thrived. After being accepted into UC Berkeley, she moved to America to attend Grad School. American school was a strange new experience for my mother.

Chinese education was very formal, and very rigid. The teacher had control over the classroom at all times, and it was the job of the student to listen and to speak only when spoken to. Students worked individually at all times, whether it was studying, homework, or exams. By contrast, American education was much more free-form. There was much room for interaction between students and professors, with classes even featuring discussion and response sections that were entirely absent from Chinese school. Furthermore, students were expected and encouraged to collaborate outside of class, forming study groups and group projects. It took my mother a while to become acclimated to these methods of study, but she soon grew to love them. By combining American and Chinese learning methods, she was able to gain an understanding of the subjects that few others had. When her final tests came, she found them to be much easier than she had expected, passing them with flying colors. Armed with the American education that she came for, my mother set out into the world, ready to make a new life for herself.

Now, my mother has lived in America for decades, and it has truly become her home. She met her future husband in Grad School, and went on to have two children, help her sister and mother move to America as well, and secure a happy job teaching elementary school in Palo Alto. She says that while she has lived in America for several years, she is still very connected to her Chinese heritage. She still observes many Chinese rituals, such as Lunar New Year and Feng Shui.

However, she thinks of herself as neither truly American or truly Chinese. Rather, she is a mix of the two, with old traditions settling nicely among new ones. She is satisfied with the life she has made for herself, and the balance she has managed to obtain between the tried-and-true nature of her native country and the new, bombastic attitudes prevalent in American life. In short, my mother was forever changed by her choice to immigrate, and is better off for having done so.

This story was written by Osmanthus Lynch, son of the immigrant school teacher and a student at Palo Alto High School.