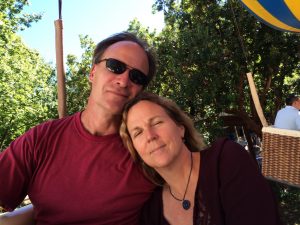 Stuart and his wife Adrienne at Gilroy for my sister’s birthday.

My father has always loved puzzles, logic, and mathematics, winning many competitions in chess, math, and physics. Stuart Fiske was born in 1964. Because his father was both a lawyer and a farmer he grew up between an apartment in Montreal, Canada, where he went to school, and a beef farm in Ontario. An only son with 4 sisters, he did lots of work around the farm: fixing fences, clearing fields, and feeding cattle. However, his true passion was problem-solving. He grew up speaking English, but, because he lived in Quebec, attended school in French; this made him an outcast for most of the primary school. He eventually went to college at his local university, McGill, as was customary in his area, majoring in electrical engineering. It was not until graduate school that he considered moving to the US.

Stuart and his wife Adrienne at Gilroy for my sister’s birthday.

When he was accepted into MIT for graduate school he knew that he was going to go to the US. He felt that acceptance to such a prestigious school is not common, so it was best to take advantage of it when the opportunity presented itself. So, at age 22, he moved out of his parent’s house and drove to Boston.

A few things struck him about his move to Boston. For example, he was baffled by how expensive everything was there. However, there were also some similarities. Both the fact that Boston and Montreal are of similar size and that Massachusetts’ left-wing views align with those of Canada eased his transition. His first living space was the basement of someone’s house which he rented with a roommate. The basement was very cramped, just a minimal kitchen, with a fridge and a stove, and two bedrooms. It was, however, in a nice neighborhood, walking distance from his classes. My dad stayed in Boston for his masters and eventually Ph.D. in electrical engineering.

In school, my dad was introduced to my mom through a mutual friend. After finishing university, he moved with her to Silicon Valley to pursue work and stayed to raise a family. While his story is not the most thrilling, it is one of success. My father was the first in his family to move to the US, rising from his lower-middle-class family to pursue his education and succeed in the digital world. While he lost the familiarity of where he had lived all his life, by moving to the United states he was able to gain one of the best educations and bountiful job opportunities that he may not have otherwise had access to in Canada.

This story was written by Cameron Fiske, the son of Stuart.