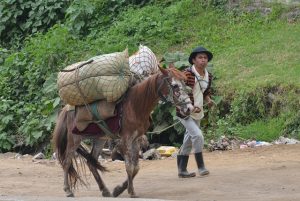 My dad lived in San Raymundo, which is a municipality in Guatemala. He lived in a nice, medium sized house with his 2 brothers, sister, and his parents. My dad had many responsibilities around his house. He would wake up at around 5 every morning to take care of the cows and the crops, and then he would get ready to go to school. He migrated to the United States in 1989 at the age of 21. My dad made his own decision to leave Guatemala, and he had to leave his parents and his siblings behind. My dad decided to immigrate to the United States because there were a lot of problems with the government. The government was forcing people to help them, and they made people do whatever they wanted them to do. The government was even forcing people to do their dirty work, such as killing other people. My dad did not want to be involved in that, so he decided to leave before it got any worse.

My dad had to take many dangerous steps to leave Guatemala and make it to the United States safely. He made his entire journey without any documents. He traveled with 4 other people, but they caught one of them and sent him back to Guatemala. He had to walk all the way from Guatemala to Mexico, but he would sometimes take a bus to cover more distance. When they were approaching checkpoints, my dad and the other people would get off the bus, and walk around the checkpoint, until they passed it, and they kept on walking. When they reached one of the final checkpoints, they were taught how to get past the checkpoint. My dad and the 3 other people he was traveling with, had to get into the trunk of a car until they passed the checkpoint and were safely into the United States. This was one of the most uncomfortable parts of the journey, because they were really squished into the trunk, and when my dad got out, he couldn’t feel his body due to the fact that he was really squished. Once he reached the United States, and was able to go out by himself, the first thing he did was get a job.

When my dad first arrived in the United States, he lived in Los Angeles, and searched for a job. The process of getting a job was very difficult for him, since he didn’t know any English. He had a few friends that were already in the United States, and they gave him the opportunity to work with them. My dad did not give up because the fact of leaving his parents behind in Guatemala motivated him to work harder so that he could make more money to send to them to help with the tough life in Guatemala. Along with working with his friends, he also went to school for 3 years. It was very difficult for him because he would be working the entire day, and then he went to school from 6 to 9 pm every day. This made his day extremely long and tiring. Afterwards, he moved to San Francisco and continued studying for 3 more years. Unfortunately, he had to stop studying because working and studying was too much for my dad. His lack of knowledge in speaking English caused him daily difficulty. One time, in Santa Monica, my dad and his friend went to eat hamburgers. They were planning on ordering one hamburger each, but they couldn’t order correctly because they didn’t know English. Instead of ordering one hamburger each, they received two hamburgers for each of them.

My dad has already grown accustomed to life in the United States. He doesn’t regret leaving Guatemala because he knows that he made the right decision. He has more opportunities, a better life, and more chances to help his mom and family back in Guatemala. My dad doesn’t miss much from his original residence, because he is very used to life here now. The only thing that he misses is his mom. Even though my dad and his mom still visit each other, he still misses her. The thing that he appreciates the most about his new residence is the many opportunities that it provides him, in order to live a good life in the United States.

Currently, he works as a cabinet maker, enjoys playing soccer and going out to eat. He enjoys going on vacation and visiting as many places as he can. I chose to interview my dad because he has told me short stories about his time in Guatemala, and I wanted to learn more about his journey and how he spent his first months in the United States. I was interested to learn how he came to this country since I spend a lot of time with him.