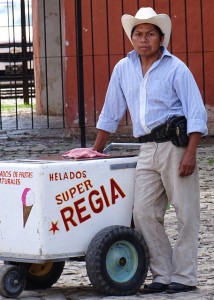 No education. Hard work. Poor. That is my life in Michoacan, Mexico. My family lived in a ranch type of home. Everyday in the hot sunny morning, I would breath in the scent of fresh dry dirt the moment I stepped outside onto the dry, cracked dirt road, wearing almost the same exact clothes each day: A plain white shirt and simple brown shorts with little stains here and there.

I would always go to the back of the house where my family kept the livestock. I would go to as many animals I can – to pet, talk, and take care of them, and milk any animals that can give my family milk to make cheese.

We also grew all kinds of plants like chili plants, tomato plants, beans, you name it and everyday I would get tanned by the sun and my knees, hands, and clothes would get filled with dirt from trying to pick up the plants that are planted on the ground, for instance carrots. I was only a short, skinny, 6 year-old when I did all of this because there was no school.

To gain more money to support my family, I decided to live alone in a very busy town called Via Hermosa. I was only twelve years old when I got my first job In Via Hermosa, which was to sell and make ice-cream outside in the sizzling hot sun.

When 6 years had passed and had enough money to buy the necessities to have an easier time doing farm work at home, I decided it was finally time to move back in with my family. I helped around the house as I usually did when I was a kid only this time it was a lot easier than I remembered, but still very tiring.

I need a better way to support my family, I thought. That was when I had the idea to move to America at age 20.

When I left, I brought a necklace with the Virgen De Guadalupe on it because I felt that it would protect me, along with a backpack full of clothes, money, and food.

I rode a bus along with other people that I did not know together for three days and two nights to get to Tijuana. Each day on the bus meant getting closer to the United States.

There I found a guy who knew the directions to America . We went walking along a beach which was the only obstacle that kept us away from reaching the next city over.

It did not take a long time as other would think to cross the beach. The trip was about five hours long. At the end of the beach there was a border line that we had to cross. At that time there was a single wire string that had little hooks on it.

Before we crossed the border line a group of people with guns came out of nowhere and demanded we give our money and valuables to them. At first we did not believe them, but then they pointed the guns towards the sky and started shooting.

I became stiff with fright. I felt dizzy and hot and my mouth was dry. I could practically feel all the blood rushing from my veins all the way up to my head out of nervousness. I pushed my fright aside and quickly grabbed my Rosa De Guadalupe necklace and stuffed it inside my mouth as quickly as possible without trying to get noticed.

The whole group gave the bandits in which I call rateros all their money and valuables. Luckily for me, I had most of my money stuffed inside my boot. After the rateros were satisfied with what they took from us they left.

After the rateros had left we continued on our journey to make it to the United States. Eventually we made it to a city called Chula Vista, United States. I felt happy and relieved that we finally made it to the United States all thanks to coyote, although we did have to pay $200 to him for the information, but it was all worth it at the end. I never doubted that I would make it to America. I always believed that I would make it and if God let me cross then I would be lucky enough to cross.

When we (the group) were far enough into Chula Vista, the coyote opened the top of the sewers and told us to wait for him inside the sewers until he comes back with a van to pick us up. We waited in the smelly sewers for about three hours – for the van to arrive and pick us up and take us to a city named East Palo Alto.

Coming from a house where there was nobody but my family living in that area, everything really was as I expected it to be; the big cities, houses, roads, and the buildings, were all beautiful. And when I went to San Diego and Los Angeles, I just couldn’t believe my eyes. I was beyond surprised and amazed.

Before I lived with my wife and had kids, I used to live with my older brother for some time. When I came to America, I didn’t find it difficult to communicate because a lot of people here spoke Spanish and I already knew some English beforehand.

As of today I feel happy and satisfied with my life. I hope that in the future that my family are still together and that my kids go off to college to become successful.

This interview was conducted and written up by the daughter, Anayely, a 9th grade student in Redwood City, CA.