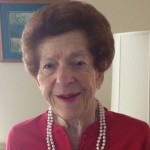 Lottie Burger left Stuttgart, Germany because of anti-semitism in April 1938 at the age of eight with her mother, father, and grandmother. As there was no port in Germany they traveled first to France to depart, where her grandmother took her underground to see the subway for the first time. They arrived in New York on the Queen Mary and ... END_OF_DOCUMENT_TOKEN_TO_BE_REPLACED