Scottish Lass Seeks a Man and a Tan 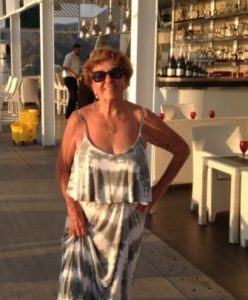 Anna Fiorina immigrated to California in 1962 from Scotland. She was born in 1941 to an Italian/Scots couple named Armando(Andy) and Kathy Bertellotti. They had married in 1936 against their parents wishes ,partly because he was Italian and she a Scot and partly because of religion, Catholic and Protestant. They ran a small fish and chip shop in Kilmarnock, Ayrshire called The Ideal Cafe, where they had a baby daughter named Aida. Little did they know that when WWII began, the Italian Dictator, Mussolini, would ally with Hitler.

They were interned in a town called Dalmellington for the duration of the war. The whole family including Uncle Rudy lived in one room within a large, decrepit rat-infested tenement. The room had a coal fire,gas lamps and cots. Although they had done nothing wrong, they were forced to stay.

Anna’s mother experienced complications during labor and was taken to a hospital several hours away. Andy escaped the confinement to go see his newborn child. The new parents were so grateful to the mid-wife, Annabel, they named their daughter, Anna. The two children grew up in the rubble of war as Anna recalls in her book, “Born in Internment.”

At the end of the war the family moved back to Kilmarnock. Anna was educated at the Bentinck School and Kilmarnock Academy. She finished her schooling at Glasgow School of Radiology as an x-ray technologist. Soon after she had inclinations to move to Italy to live with her grandparents; her cousin Violet, who was already an R.N., had other plans.

One afternoon , as the girls sat on the flat roof of Violet’s tenement home Violet showed Anna a copy of Life Magazine sporting pictures of San Francisco and it’s famous waterfront, Fisherman’s Wharf. That and a chance to work at Sequoia Hospital in Redwood City (Climate best by government test) was enough for these two spirited young people to apply for a visa to emigrate from Scotland to America. Their goal—a man and a tan!

Anna’s father was less than happy but her mother encouraged the young women, so off they went in April of 1962 on a large prop plane bound for Iceland and New York. Fortunately they were met by a family friend in New York who steered them through the tangle of the Airport.

They arrived in San Francisco around 3.30 in the afternoon confused and more than tired. They had been up for almost two days. They called the hospital and a young lady from Personnel picked them up, escorted them around the hospital. They had lab work and an interview and then Anna went into the x-ray department where she saw two handsome young men-that cheered her up! Little did she know she would marry the young man whose name was Ron Hess. They are still happy and retired in Lake County, California. 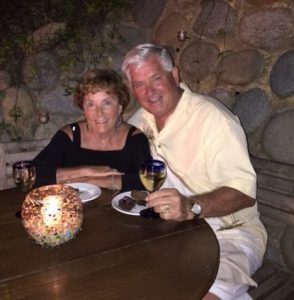 Anna and Ron in Puerto Vallarta

The first few months in America were very difficult for Anna—her cousin had to go to another hospital for training—so she had to move in with strangers who quickly became friends. She married Ron in 1964 and they moved to Napa. Would she change her life today? No chance. Her father died at the young age of 57 which was devastating and her mother has been gone for a long time. Her life was filled with raising her two children, Andy and Culzean, and working as an x-ray technologist for 50 years. She and Ron enjoy their life and have travelled extensively. They love living in Lake County and in her retirement Anna has written a novel based on her early life in Internment and the War years in Italy where her Aunt and Uncle saw and were involved in the atrocities of the Nazi invaders. The book shows the joy that is in a family that sticks together and is resilient because of the love they have for each other.

This interview was conducted by Maria Vazquez of Anna Fiorina Hess.