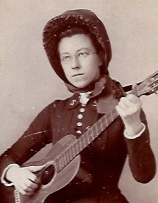 Click Here to Listen to the Audio Recording – Read by Carolyn Williams, the Great-Granddaughter of Millie and a Resident of Palo Alto, CA.

“You are all arrested, come along,” declared Officer Pete Walsh of the Butte, Montana police force. In the midst of a heavy snowstorm, Captain Millie Lick (Lueck) and her six fellow Salvation Army soldiers were taken down to the city’s barracks on charges that their marching and singing in the streets was disturbing the peace. As it turned out, the complaint was from the owners of dive bars who were afraid of losing their clientele to the nightly Salvation Army prayer meetings.

Leaving Germany – The Luecks were a small family of four who left the rural farming village of Stargard in what is now northeastern Germany. It was 1874 and Bremen shipping merchants were heavily advertising cheap passage to the US in order to fill their empty US-bound ships with emigrants so they could return with moneymaking US cotton and tobacco.

Peasants were motivated to emigrate as they were rapidly losing their land due to German unification as well as economic insecurity caused by an oncoming great depression triggered in 1873 after the close of the Franco-Prussian War.

Along with 150,000 other German emigrants in 1874, Friedrich and Wilhelmina, ages 34 and 32, and their two children Millie Pauline and Wilhelm, ages three and one, sailed to the USA where they could find good farm land and a better opportunity in life.

Arriving in Wisconsin – Wisconsin was a prime destination for German immigrants with many already having settled there during the emigration boom of the 1850s and it is likely that the Luecks had heard that Wisconsin welcomed farming families such as theirs.

They settled in Green County in southern Wisconsin and began farming and adding to their family, another four children over the next 10 years.

Millie Pauline – This is the story of the Lueck family’s first born, Millie Pauline, who arrived in Wisconsin from Germany when she was three, and grew up with the hard labor that is life on a farm. 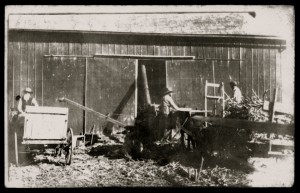 Threshing on the Lueck Farm 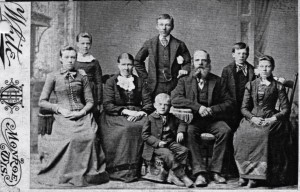 What lit a spark in Millie to leave the farm for an evangelical life did not come down in the family history story. But I can imagine a girl’s desire to see the world outside of a farm and cheese-making community in southern Wisconsin as well as her finding a passion for helping people.

Although she grew up being called “Pauline,” she began to use “Millie” as her first name, a derivative of her middle name “Emilie,” and “Lick” instead of “Lueck” as her last name when she left, perhaps crafting a new, more “American” identity.

Butte, Montana – Two years later Millie was now Captain Lick (Americanized “Lueck”) and in charge of a small band of Salvationists sent to make conversions among the rough crowd in the largest mining town in the world, Butte, Montana.

The first months were full of challenges. Most people, including both the good citizens of Butte and the miners, scoffed at the Salvationists as an offbeat religious group.

Their prayer meetings were crowded, but filled with “roughs” who harassed them with catcalls, jeering, breaking out in popular songs instead of hymns, and throwing stink bombs. Drunks broke up the meetings, and newspapers mocked and ridiculed them.

On a snowy February night in 1890, the Butte police arrested seven Salvationists including Millie on the charge of disturbing the peace as their band marched through the streets playing and singing hymns.

Fortunately, at the trial the following week, reason prevailed. The people of Butte opposed the evangelical methods of the Salvation Army, but they could not deny the good that they did and the right to do it. The case was dismissed.

The Salvationists continued their activities. Newspaper accounts report that Captain Lick and her loyal soldiers held nightly prayer meetings, visited jail houses, marched with their band (Millie played the guitar, see photo) through the streets singing hymns and inviting people to the meetings, and wove their way in and out of bars nightly selling the Salvation Army’s magazine, “The War Cry.”

Captain Lick, along with her two women lieutenants, had a motto: “Never Say Die.” 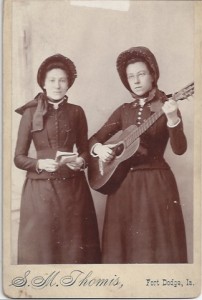 By the end of four months, their group had grown to 60 members, and one of them was Millie’s husband-to-be, G. Kenneth MacInnis, a rollicking Canadian Scottish miner who is thought to have disrupted a few meetings before he converted, or was “reclaimed” as he liked to put it.

Millie and Kenneth – The following year in 1892, Kenneth and Millie were married in Des Moines, Iowa, where The Salvation Army had its headquarters. Both Millie and Kenneth were soldier evangelists, and for Kenneth, it was the beginning of a lifelong career as a preacher. Millie was age 21 and Kenneth 27.

Several years later in 1895, Kenneth enrolled at Lawrence University in Appleton, Wisconsin, for a seven-year journey to earn a bachelor’s degree in Classical Studies. In Millie’s obituary, it is stated that it was her encouragement that helped her husband complete his formal training.

To get through college, Millie and Kenneth ran a boarding house where they rented rooms and Millie cooked daily meals for 12 men. She also took two years of history and literature classes at Lawrence University and looked after their two children.

Before he graduated from Lawrence at age 37, Kenneth was ordained by the Methodist Episcopal Church and spent his life as a pastor and lecturer in Wisconsin.

Millie was an active member of the Methodist church and other societies throughout her life, including a term as the President of the Woman’s Christian Temperance Union in Evansville, Wisconsin.

As a child of immigrants, and an immigrant herself, my great grandmother Millie was said to be a hard and constant worker – in her husband’s words “No idle hours in your plan.” She died shortly before I was born, but I believe that she set in motion a legacy of valuing hard work, education, moral living, helping others and closeness in family life.

I grew up hearing that Millie said her life reflected the three German Ks: Kirche, Kinder and Kuche ‑ Church, Children and Kitchen. Although the three German Ks have been modified in subsequent generations as women have moved to work and professions outside the home, her immigrant values have remained core to our family.