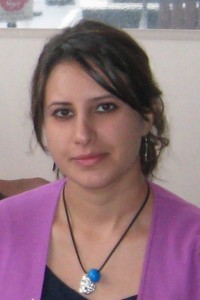 My journey to study Archaeology began in Isfahan, Iran one of the most beautiful historic cities in the world, where as a child I became enthralled with ancient temples and fabulous palaces. Isfahan flourished during the Islamic period and became the capital city of the Safavid kings. During that period entire surfaces of mosques were covered with colored tiles bearing decoration and magnificent calligraphic inscriptions. As a young child, these inscriptions inspired me to learn classical Persian calligraphy at the Iranian Calligraphers Association for eight years.

When I was older, I started to collect pottery sherds from the field around our home; the sherds fascinated me and I even put together my own little museum with them. These formative experiences inspired me to study archaeology. My undergraduate degree exposed me to various archaeological excavations and lab work experiences.

After completing my undergraduate degree, I felt I wanted to come to the United States to continue my archaeological education where my family already resided. For me one of the biggest challenges that I had as an Iranian-American in academia was to create and research of essay assignments. In order to improve my writing skill I had to go to ESL classes or taking a non-credit courses which I had a difficulty to provide enough budget for these classes.

Finally, I made it to the graduate school at Georgia State University and completed my degree. However, the biggest challenge started when I could not find an occupation with my degree in Anthropology. Therefore, I discovered that I also have a passion for teaching and I became an after-school teacher.
While working on my graduate studies at Georgia State University, I developed a research project on how to use calligraphy artwork and material culture to promote human rights. I focused on calligraphy because of its aesthetic and spiritual significance. In the Middle East, calligraphy is an important art form and is often infused with religious significance. As an Iranian-American, I see this as an opportunity to offer another perspective on Islamic culture through both historical and contemporary calligraphic artwork. It is my hope to develop an exhibition at one of the bay area art museum on calligraphy in order to promote a better understanding of different social groups and their material culture and access to knowledge about their meanings.

This story was contributed by Foster City resident, Firoozeh Forouzan.