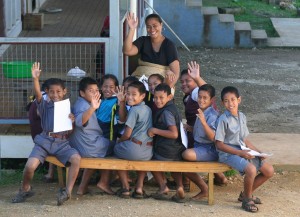 Photo by John Abel of an outdoor class in Tonga.

Life in Tonga was nice and laid back with the nice warm weather and sandy beaches with clear blue water. Sela lived in a rural area where everyone knew each other. Living in Tonga with such a nice calm life you would think that life was perfect, but for Sela she wanted more in life, she struggled with getting the education she wanted forcing her to move to America.

Not only did Sela want to leave for a better education, she had also wanted to leave because her family had already moved to America and she felt alone living in Tonga without them. Education was very important to Sela and as much as she loved it in Tonga, she had to move to America because her parents had to pay weekly/monthly fees for her and her three other siblings to stay in school. Moving to America would not only provide her with the education she wanted, but her parents wouldn’t have to worry about paying for school fees.

Sela came to America on an airplane, while on her way here she faced some difficulties. When Sela was on her way to America, she had to stop at American Samoa, and while she was there she had to get her student visa for her to be able to come to America, which was a very difficult process for her. The Embassy was really tough with her because she was still young and school was still in session in Tonga.

Sela went to Inglewood, California, where her family was living at the time. When Sela arrived in Inglewood she was really scared because she’d never seen buildings so tall and big before. She was amazed by how different Inglewood looked compared to Tonga. Sela had a hard time living here in America where everybody spoke English and other people had trouble understanding her because of her accent. Sela eventually learned how to speak better English and now speaks it fluently.

Today, Sela has three kids, two daughters and one son, and loves to help people, she is a real estate agent and a caregiver.

Sela was interviewed by her daughter, Tutaleva Fuka, a 9th grade student in Redwood City.