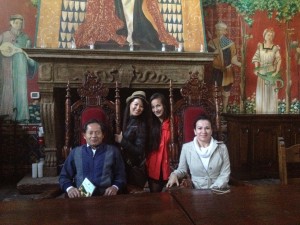 The Chang-Urena family is one founded on immigration: the movement from Taiwan to Costa Rica and from Costa Rica to the United States.

Upon setting foot on “Tico” ground in 1983, Liu started on a journey, one which brought him to America with his wife and two daughters. The initial purpose of his voyage to Costa Rica from Taiwan was business. Prosperous times approached after Liu married his wife, Yoly, and the two built a network of business partners. With growing ambition and a new member in the family, they applied for US residency that with time became seemingly unfeasible. The Chang-Urenas were blessed with another child a decade after the eldest was born and life was auspicious.

US residency was unexpectedly granted to the family seventeen years after the application had been sent. A big decision had to be made and ultimately, they migrated leaving behind luxuries, a comfortable life, and family. It was a drastic change and difficulties derived from uncharted territory.

Sacrificing his economic fluidity for what would perhaps lead to a better life, Liu gave up his home and business. He questioned his ability to provide for the family as he grew older for he did not speak the language with ease and he did not have business partners to seek aid from.

Yoly, who had once been independent and self-reliant, worried about the same things that her husband did. She found herself involved in her youngest daughter’s school district in programs for immigrants much like herself, English-learning courses, and the PTA. This involvement, however, did not put her pain at ease. Having come from a large family it was especially difficult for her to part with her beloved country.

Thai, the eldest of the two daughters, took up a job as a receptionist in a company to alleviate her parents’ burdens. Thai’s perspective of life altered as her tenacity and perseverance were continually tested; opportunities were no more where they used to be and consequently, she had to work harder. Having to worry about an uncertain future, a no longer fluid income, and without anyone to solicit support from, she had to learn unfamiliar ways through her own exploration. An added weight was added to her shoulders as she felt it was her responsibility to look after her family.

Oftentimes, adults assume that children do not understand the turbulent things they undergo. This, however, was not the case for Chia. It was especially difficult her to see her mother struggle through depression, her father’s hair turn gray from worrying, and her sister assuming all the responsibilities she could. Only 7-years-old at the time, her abilities to lift the weight off their shoulders was limited.

The turbulent times the family experienced together and individually have made them more humble, each member involved in their own philanthropic organizations. In retrospect, suffering through the process made them more hardworking and selfless people. Although they had to compromise luxuries like vacations and weekends not only because of their stifled economic fluidity, but also because of the family’s devotion to education, there is nothing they would have done differently. Chia has only two years of high school left with ambitions to “save the world.” Thai, a graduate from SCU’s Leavey School, was blessed with opportunities and is now working for Splunk. Liu and Yoly’s tensions are significantly relieved by their daughters’ independence. The United States was a place for the Chang-Urenas to live to their full-potential and push themselves to heights they never deemed possible. Eternally grateful they are, that they have now found ways to heal the wounds of others. In being stripped and clothed, the family metamorphosed into a voice for not just people like themselves, but people in general.