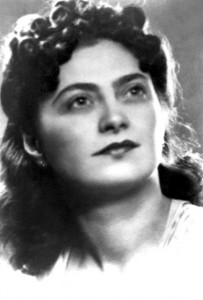 I am from Naples, Italy. Naples is a beautiful city. But October 1, 1943 when the American troops finally came in the city, Naples was a big gigantic mess. No electricity, no gas, no water and no food, just garbage everywhere. You see, when the German troops left they blew up and destroyed whatever was left. Anyway, I’ve barely started to tell my story.

My story is very romantic! It was March 19, 1944 at six o’clock in the evening; my family and I were in the dining room having dinner. Somebody knocks at the door. My brother went to open. After a few minutes, he came back to the dining room and said, “In the foyer is an American officer and he speaks LATIN!” My father, who spoke English, said “I better go talk to him. I think he’s lost. Evidently, he is looking for someone in the building.” He got up from the table and went to the foyer. After a minute, he escorted the officer into the dining room and said, “It’s not a mistake, this officer comes for a visit.” At this point, the officer introduced himself. “I’d like to pay my respects to you and your family. My name is Stefano Edwardo Stewart. I am stationed at Capodichino. I live not too far from here and share an apartment with Captain Moore who is very fond of you and gave me your address.” (Captain Moore was my brother’s friend.) At the same time, he was looking at me and said to himself, (she’s really beautiful. She has beautiful long and very black hair, green eyes and an alabaster skin.) At the same time I looked at him and said to myself, “he’s tall and pretty handsome. He’s not so bad.” Well, he stayed until 10 o’clock talking about various things, especially the eruption of Mt. Vesuvius and all of the ash and how the ash covered the wings of B-25’s and bent them. He talked about the lava coming down the mountain and how fortunate it was that the lava was going in the other direction and how fascinating everything was. Finally, when he decided to leave he said, “Thank you for this beautiful evening, and with your permission, I’d like to come back tomorrow if you allow me. My father answered and said, “You are very welcome. Come back anytime you like.” Well, he came back tomorrow and tomorrow and tomorrow, and every day thereafter.

One night, he invited me to go dancing. With my parents’ permission, I went. What a strange dance. I never had seen anybody dance like that. The name was “boogie-woogie”. I couldn’t dance the boogie-woogie, so we sat at a table. Stefano had a martini, and I had a strange drink I didn’t like. The name was Coca Cola, and I still don’t like it.

Easter Sunday was around the corner, and by now, we called him Stefano. My mother invited Stefano for dinner, which he accepted without hesitation. Now, how do you cook dinner without gas or electricity? The Neapolitan people are very resourceful. They invented some kind of barbecue using a garbage can and sold them for a few thousand lire. We bought one and cooked on the balcony. How about charcoal? None available. The same people were collecting wood from bombed buildings like furniture and doors, etc. Cutting up and selling it in small bundles. The smell from the wood was not very pleasant.

We know Stefano pretty well by now, and he told us quite a bit about himself. We know he graduated from Miami University in Oxford, Ohio. After he joined the Army Air Force, he was sent to M.I.T. in Boston where he got his Masters Degree in Meteorology. After Boston, he was sent to a fighter bomber Group staff. From there, overseas to Africa, then Italy. Now he was Base Weather Officer at Capodichino with the 12th Weather Squadron.

By now Stefano was spending all of his free time at my house. We used to play games, especially checkers, which he usually won. We talked with him in Italian. Stefano translated from Latin into a new kind of Italian language. Sometimes there were words I can’t repeat. We really had lots of fun. Sometimes we went for a walk at the park. Sometimes we went to the seashore in his Jeep. Always in company of someone else. We discovered that we had a lot in common and really liked each other.

Every time Stefano went for a trip he brought me a present. Not too expensive or too extravagant just something to show he was thinking of me, but the gifts were always beautiful.

In August, he went to Cannes, France on R & R (Rest and Recreation). When he returned, he gave me a beautiful box with Chanel No. 5 perfume, plus a letter. A very special letter telling me how much he loved me, and how he would like to marry me.

I took a piece of paper, and I wrote, “When?” Soon as I talk to your father he answered.

They have a long discussion. Finally everything was alright. Stefano wrote to his parents to let them know his decision. His parents congratulated him and sent an engagement ring plus a double wedding ring. We had a very nice engagement party with champagne included, which was rare to get. We decided to marry by October.

In the meantime, he tried to apply for permission to marry. Surprise! He can’t marry anyone until the war was over. Why? He knows too much. (You are in operations which is top secret so you are top secret. You brief the pilots before they go on their mission. This is sensitive. Whatever you know is sensitive. So, when the war ends, if you still want to get married, submit the application, and after an investigation it will be approved or denied, because even if the war is over you are still in operations.) Finally, May 17, 1945 the war ended. Stefano submitted his application. After two weeks, he received the answer. Capt. Clarence Albert Stewart congratulations, permission is granted. “Who is Capt. Clarence Albert Stewart”, I asked. Stefano answered, “That’s me, my name.” “Your name? You said it was Stefano Edwardo.” “Yes, a sergeant who knows Italian told me so.” I say, “Wrong, Clarence doesn’t exist in Italian”. Anyway, forget about Clarence Albert, his name is Stefano forever.

Now we concentrated on our wedding. How about a wedding dress? Forget buying one – none available. How about material to make one. No luck. So, my mother decided to use a brand new linen bed sheet. A bed sheet? I didn’t like the idea period. A lady friend of the family came to the rescue. We can dye it any color you want. Her family owned the plant where they dyed material in bulk. She suggested for me to pick a color, which I did – Sky Blue. The plant was closed for the war, but her husband opened it and called a worker to come in and dye the material. This was her wedding present to me. How about announcements and invitations? Again, another present from a family friend who was a director of a newspaper. How about the veil? We had a piece of tulle left over from a curtain, and we made a veil. And now a big surprise! The 12th Weather Squadron gave us the wedding. A wedding with all the trimmings, plus a week honeymoon at the Isle of Capri. The wedding was performed at the Hotel Eremo on the top of Mt. Vesuvius. All the military free from duty attended, including the squadron commander, his aid, and the press photographer. After the ceremony, everybody wanted to kiss the bride. The commander congratulated Stefano and said, “Stu, how did you manage to make such a good catch”. A magnificent dinner followed the ceremony. My father was able to buy a very special wine called “Lacrima Christi”. This wine is made from grapes grown on Mt. Vesuvius. We spent the night at a hotel, and next morning left for Isle of Capri where we stayed in a beautiful villa with a splendid view of the Faraglioni rocks. (Rocks which stick out above the water) We had a car with a chauffer who drove us all over the island. We had a very good time. We were fortunate to have the right weather to go into the Blue Grotto. You have to lie down in the rowboat to get in. When inside it’s spectacular. After a beautiful week, we returned to Naples and started our married life.

This year we are going to celebrate our 60th Wedding Anniversary. We have four children, two boys and two girls. We also have 4 grandchildren, two boys and two girls. In 60 years we have met a lot of interesting people. We spent one year in Cairo, Egypt and two years in Madrid, Spain. Gloria, our second child was born in Madrid. Our first child was born in Naples, Italy. In 1949, we came to the United States and lived 13 years in New York where George and Richard were born. From New York, we moved to Mt. Holly, New Jersey for 10 years. From New Jersey, we moved to Spokane, Washington where we currently live. After my husband retired, we spent the winters in San Jose, California. Spokane is too cold in winter and we are not “spring chickens” anymore.

We still play checkers, but Stefano doesn’t win all the time. I don’t let him.

This is my story and I am very lucky. 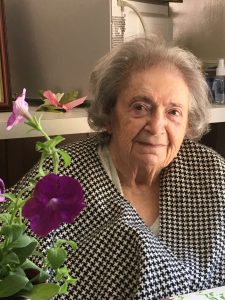 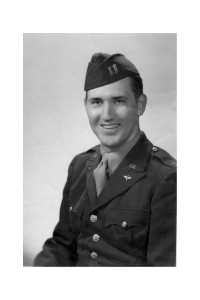 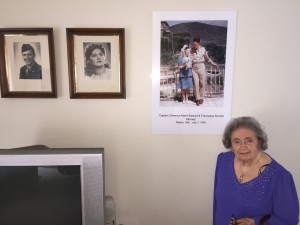