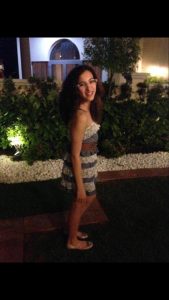 If your parent has the opportunity to come to America and work in one of the most successful cities, would you be willing to leave your life behind and start a new journey? Palo Alto High School junior, Yasmine Mourad, moved to the United States in 2016 when her dad, Mohamed Mourad, was given an opportunity to work at the YouTube headquarters in San Bruno, CA. My friend, Yasmine Mourad, has lived in multiple countries around the world and has only lived in the United States for two years. Though it has taken time to adapt, Mourad feels lucky to call Palo Alto and the United States her new home.

Though she has little memory of the city, Mourad was born in Fontainebleau, France and moved back to her parents’ home country of Lebanon when she was only 4 years old. Mourad’s Lebanese parents have been speaking to her in both English and Arabic since she was born. Mourad’s family decided to make another big move and leave their home of Beirut, Lebanon for Dubai, a city in the United States Emirates. Mourad lived in Dubai longer than she has lived anywhere else, which made its futuristic buildings and fast-paced society feel like home.

Yasmine Mourad’s dad, Mohamed Mourad, made the decision that their family would make the move to the United States. Though she was worried about leaving her friends, family and lifestyle behind, her dad assured her that her new life would be for the best. In the Middle East, women do not have as much freedom and abilities as women in the United States do. In the Middle East, very few women complete a high quality education, have important occupations, or even play sports. This is why Mourad’s father felt moving to America would give Yasmine opportunities she would never have in the Middle East, “Opportunity will not come easy and you will not reach much success if we stay in the Middle East,” said Mohamed.

Mourad’s father had reached great success in Dubai working for Google, and after reaching such a high position in Google for all of the Middle East and Asia, he was given the opportunity to come work for the YouTube headquarters in Silicon Valley. Like many other immigrants, they came to America for a better life. Mohamed Mourad felt confident in his decision in moving to America, saying to Yasmine and her younger brother, “America is the land of opportunity. You will thank me in the future.” After life in the Middle East for 15 years, Mourad packed up her belongings, said goodbye for her friends and family, and hopped on a flight to the U.S.

After a 16 hour flight, Mourad and her family arrived in Palo Alto, California. When Mourad was told she would be moving to the United States, she imagined a stereotypical Californian life. Mourad fantasized living the American dream and expected her life to be similar to all the American movies she had seen. After settling into her home in Palo Alto, Mourad began her sophomore year at Gunn High School. The culture shocked her hard. America was not like the movies she had seen, and she wanted to return home to Dubai. Mourad quickly grew a hatred for Palo Alto because adapting did not come as smoothly as she had hoped. After a year at Gunn High School, Mourad made another transfer for her junior year. Once a spot opened up, Mourad enrolled at Palo Alto High School, the other high school in the district. Though she feared facing the difficulty of making friends again, Mourad had hope. Since starting school at Paly, Yasmine Mourad has created many friendships which has caused Palo Alto to feel more like home.

After two years in the United States, Mourad now understands why her dad knew moving to America would benefit everyone in her family. After high school, Mourad plans to attend college in the United States where she can further her education, an opportunity she would not have in the Middle East because the education is not as advanced. Though adjusting to American culture took time, she has progressed a lot this past year, becoming more aware of her environment, American holidays, and the way life is lived in America. Yasmine Mourad feels privileged to live in such a successful place and hopes to continue learning about and growing up in the American culture.