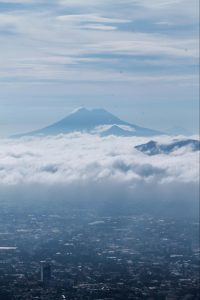 “One of the reasons why I appreciate this school and why I would do anything for this school is because they changed my life. They made my American dream.”

Ernesto Cruz is the girls’ soccer coach and campus supervisor at Palo Alto High School. Cruz has been at this school since 2004.

Cruz was born in El Salvador. He grew up in a poor neighborhood, but regarded his childhood as a happy place. He enjoyed school and his friends. They would spend their time on the playground playing soccer, or in the mountains. Cruz came from a small family with no male role models. He was raised by his mother, grandmother, and aunties. His mother worked as a nurse in a hospital to provide for him and his brother. Cruz regarded it as “a good community.”

In 1979, a civil war broke out in El Salvador. A military dictatorship had long oppressed popular dissent. The United States backed the dictatorship, fearing that communism would continue to spread throughout Central America. Civilians were terrorized and killed by government-backed death squads. In 1980, four left wing guerilla organizations formed the Farabundo Martí National Liberation Front, or FMLN. This was the main opposition to the government. By the end of the war, 70,000 to 80,000 people had been killed, 8,000 people disappeared, 550,000 were displaced in El Salvador, and 500,000 people became refugees in other countries. Fearing violence, Cruz’s mother came to the United States illegally. His mother eventually got papers and applied for Cruz to come to the United States. He was 19 at the time.

Cruz’s experience was very dramatic. The war had become extremely violent; he was fearing recruitment from the army or the leftist side. At the time he was living with his grandmother and had become a soccer player in the minor leagues. It was only two weeks after finding out that he could come to America that he was on a plane. He left everything behind. The hardest part for Cruz was leaving his grandmother. He regarded it as “very painful.”

When Cruz arrived in America, it was extremely tough for him. His mother didn’t have much money and he didn’t speak the language. He ended up living with a Nicaraguan family in San Francisco, sleeping on the floor. He had trouble finding a job because he could not speak English. Cruz took classes at San Francisco Community College and worked for a year to learn English. Through the program, he got a job at San Francisco International Airport working as a dishwasher in one of the restaurants.

In 2004 Cruz got a job at Palo Alto High School. Earl Hansen was the athletic director at the time. Cruz became well liked. Cruz was eventually offered a job as a campus supervisor. This was life changing for him. Cruz stated “they made my American dream.” For the last three years he had been struggling to pay for his house he had got in San Francisco. When he got the job, everything changed. Cruz expressed it as a “night to day” change. Cruz continued to visit his family in El Salvador, going back twice every year. His mother is retired now and lives in San Francisco.

This story was written by
Maja Albertsson, a student in Palo Alto.