Watch Quy present his story in front of an audience, or scroll down further for the written story. 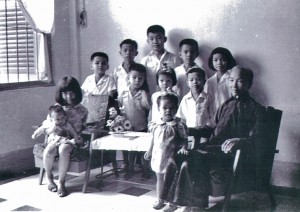 Family photo in Viet Nam about 1970

It was 1975 in Vietnam. Quy was living in Saigon, the capital of South Vietnam. All around him, he was seeing effects of the Vietnam War and communist control. Ethnic Chinese like him were being discriminated against to the point where their houses were getting randomly searched and people lived in constant fear of getting captured and dropped off in the middle of nowhere in Vietnam. 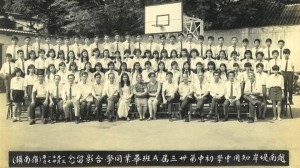 The oppression was unbearable. As the oldest of 12 children in a poor family, Quy decided that they would risk everything to leave Vietnam. But the question was: how was he going to get his whole family to escape Vietnam?

At first, Quy considered escaping by foot through the jungles of Laos to reach Thailand, where they could find a refugee camp. He spent a lot of time planning out how to do this and even bought a used, bloody camouflage uniform in case it would come in handy to blend in as a communist soldier. He took three trips to the Ho Chi Minh trail in Laos to plan out the details. They would need to survive the jungle where malaria-carrying mosquitoes thrived and venomous snakes lurked. They would need hammocks for sleeping. They would need a compass. They would need training to walk long distances. A map. Food supplies. Water. The list went on and on. The journey would take about a month and they would need to carry enough supplies for 14 people. Quy realized it would be impossible. He would need to find another way.

In late 1976, relatives suggested Quy partner up with three other people to buy a boat. They quickly moved on an opportunity to purchase a boat for 50 ounces of gold (compared to his house which was worth 10 ounces of gold).

For the next 10 months, they poured energy into remodeling the boat to get it ready for the journey to Malaysia, where they would be able to find a refugee camp. They paid for the remodeling by collecting gold from people who also wanted a seat on his boat and who also wanted to escape Vietnam in search for a better future. They replaced the engine and expanded the boat from 13 meters to 18 meters. With each passing month, more and more people paid for a seat on the boat.

All while preparing the boat, Quy also taught himself how to navigate through the ocean. For months, he had secret meetings with his uncle and cousin to organize their escape and plan their route going from Vietnam to Malaysia through the South China Sea. He bought a compass in the black market, which nearly resulted in getting caught and put in jail. He learned how to calculate the speed and direction of the boat using distance and time. He listened to BBC and VOA news on the radio every night (it was illegal to listen to Western radio) to know which parts of the ocean to avoid because of pirate activity. He was only 19, but he taught himself how to navigate a boat across the South China Sea.

Finally, in October of 1978, Quy and his family bought travel permits and passed police checkpoints to arrive at the southernmost city of Vietnam called Ca Mau, where they would board onto the boat. The day of the escape, everyone loaded onto the boat. They had paid off government officers beforehand so that officials would turn away from stopping this illegal activity. Quy took a final headcount. There were 265 people on the boat.

Only six hours into their journey, a big wave hit and cracked the tip of the boat. Quy’s dad and uncle fixed it using a handsaw and extra wood that they had brought. Not long after, they encountered the Vietnamese Navy who stopped and asked them where the boat was going. Everyone on the boat was scared that the navy would sink their boat. Luckily, they had paid bribe money to get a password that would allow for the boat to pass. It worked. Navy officials even offered to give them guns in case of encountering pirates, but everyone on the boat declined the offer. They said that they want to escape a country, not kill anyone.

The journey took three days. Most everyone vomited, leaving a sour odor to linger in the stagnant air in the crowded bottom compartment of the boat.

Finally, Quy spotted the lighthouse that he was navigating the boat towards. They had made it to the Terengganu province of Malaysia. However, the Malaysian government officials did not allow them to land their boat. They were asked to turn around. Desperate, Quy’s cousin on the boat cut a hole through the bottom and sunk it so that Malaysian officials were forced to let them into the refugee camp.

Once arriving at the Pulau Bidong Refugee Camp, Quy and his family quickly claimed a place to build their shelter. They first built their house. Then eventually dug a well, a deep hole for a toilet. For nine months, they survived off of rations of rice and sardines in from the United Nations. 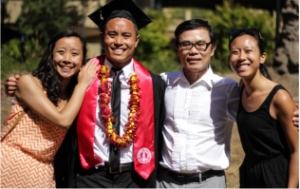 Quy and his children. Taken by Kat Young. 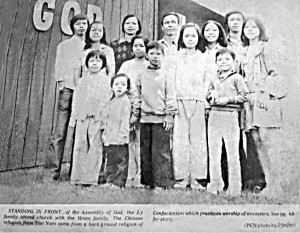 Eventually, they were sponsored to America. Quy worked at a Texas oil rubber fittings factory–60 hours a week in 100-degree sun to save up enough money to move to Seattle where he could fulfill his dream of getting an education. Determined, he quickly learned English by taking classes at a community college. He went on to receive an electrical engineering degree at the University of Washington in Seattle. He is now a software engineer living in Renton, Washington. He is proud of his three children.

This story was written by Emily Lee, an English teacher in Redwood City and daughter of Quy Lee.