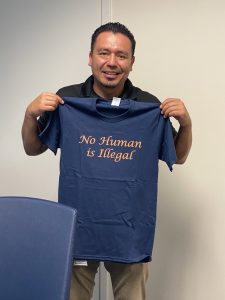 Some folks become lawyers because it is a profession that runs in the family, others find their way into the legal field through a different path. Byron Abraham Suarez, Deputy District Attorney for the County of Santa Clara, remembers that he and his sister served as translators for their parents, like many immigrant children, both even trying to explain contracts and other legal documents to their Spanish speaking parents. This early exposure to legal documents and legal issues left an indelible mark on Suarez as a child.

Suarez, a native of Guatemala who came to the U.S. at a young age, grew up in East San Jose where his family faced many challenges. However, he tends to focus on the positive aspects of his life. Though he lived in extremely dense housing with his family, two families of eight and seven sharing a two-bedroom apartment, Suarez remembers being surrounded by a tight-knit community at home and in his neighborhood. In his opinion, it is important for children to have safety, security, and peace, and collective living arrangements are more likely to provide that.

He was able to overcome the trauma of his immigration journey, adapted to this country’s way of life as a teenager, and subsequently pursued higher education and served in the military. Suarez is a veteran of the war in Afghanistan. He eventually went to law school and now as a Community Prosecutor for the Community Prosecution Unit, he contributes to reducing juvenile crime rates by connecting families with resources and informing them about their rights. He is also committed to informing the community about language access rights and resources. Mr. Suarez would like to teach others how to improve communication skills and be assertive leaders in the community.

With these achievements he continues to contribute not only to his family, but also to the community where he grew up and now serves. Suarez and the Community Prosecution Unit contribute to the community by upholding the law and by taking a more progressive stance to ensure equal access to justice. He is grateful to the local youth for reviving and strengthening his love of his native culture that comes from the indigenous peoples of Guatemala–the Mayans. His family also preserves their traditional Guatemalan cuisine and other integral cultural aspects of their Guatemalan identity. He is grateful for his family’s support and his Christian faith, that helped him navigate coming to a new country, the military experience, and his educational journey, which culminated with him entering the legal field. East San Jose, his family, the tight-knit community that looked out for him and his sister shaped who Suarez is today and he is grateful to be able to give back to that community every day through his work.

This interview and narrative were done by Victor Landaverde.