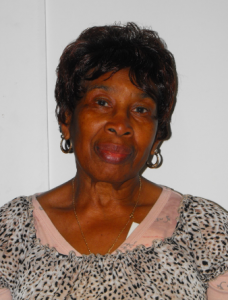 This is my great aunt currently.

Nothing the kids say about people being racist compares to the racist things the white people would say to me back then. I will forever be traumatized by the torment they put me through.

I, Lucille Puckett, grew up in Louisiana and we were dirt poor. There were 15 kids in our family and I was the youngest. Even though I was the youngest, I was one of the females. I had to work around the house and clean up after the family. My siblings and I would often fight and disagree, but we vowed to have each other’s back.

Some nights we went to bed hungry because there was not enough food to feed all of us. My siblings and I would fight to see who would get the last piece of bread.

Growing up in a segregated school, my siblings and I never fit in with other kids. We were called a lot of cruel names and we could not do the same things as the white kids such as, drinking out the same water fountain and using the same restroom.

There was one time where I was in the park and I wanted to go swimming. I was just about to get in the pool, when the white kids starting yelling at me saying that if I got in, the pool would be polluted by my skin.

“Don’t get in! You’ll make the whole pool turn brown,” they said.

I froze immediately. There was no person at that very moment to defend me. No sibling to tell them off this time.

I turned away and never went to that park again.

I got pregnant at a young age and left the child’s father because he was abusive. He would beat me and disrespect me in the most despicable ways possible. One day, he came home drunk and picked a fight with me, as usual. This time, his punches fractured my ribs.

I was laying on the ground suffering, when my older sister, Sandra, found me. She took me to the hospital and stayed by my side. I laid nearly lifeless on the hospital bed. Why am I still with this man?, I thought.

Imagine being a 19-year-old fighting for your life in intensive care.

I wanted to create a better life for myself and my children. I didn’t want them to go through what I went through.

I left Louisiana and moved to San Francisco. It was a big change for me seeing all the one way streets and high rises. It was much nicer than Louisiana.

I sometimes look back and can’t believe how brave I was for making such a bold move. I heard that there were many jobs in California and less discrimination against blacks. I packed my bags and caught a train. I left my mom, dad, and siblings behind at the age of 24. Throughout the rest of the trip, I missed my family and friends and was often quite lonely.

I landed a job at the Veteran Medical Center working in the laundry. In California, I would experience little to no racism. I would remember people talking about how California was one of the only states that never had slavery and I must admit, you could totally tell.

My dream was to become stabilized and to own a two story home with a white picket fence. This was the American Dream.

Throughout my years of exploring the jazz bars and diners, I met my soon-to-be husband, Soney.

I currently live in Sacramento in a Senior Citizen apartment with Soney. I am a much wiser person now and I am thankful for all of of my struggles, because it taught me about life and how to be grateful for things like peace and serenity and most importantly, family. I am most proud of leaving the abusive relationship. If I did not leave my child’s abusive father, I would probably be dead, never being able to tell my story about how I escaped oppression.

This story was written by Staci Edwards. A student near Palo Alto.