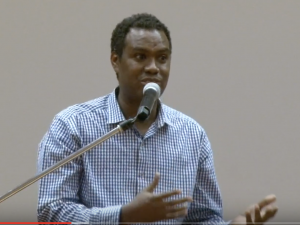 Ghezae Kidane tells his story to an audience in Palo Alto. He fled his home country of Eritrea when his stint in the national service looked never-ending. He is part of a mass exodus of young Eritreans who have become frustrated with the arbitrary rules of their “President-for-Life.” They risk their lives to escape. AUnited Nations Commission of Inquiry concluded in 2016, that conditions of Eritrean national service rise to the crime of enslavement.

Ghezae was part of a storytelling event called “When Home Won’t Let You Stay: Stories of Escape and Refuge.” It was co-sponsored by the Midpen Media Center and the Palo Alto City Library.