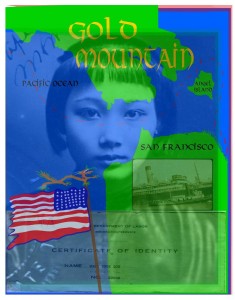 Imagine for a moment…  It is the ides of February 1926.  You are Chiu Yook Lon, an eighteen-year-old woman and a passenger on the Pacific Mail Steamship President Pierce, bound for San Francisco from Hong Kong.  The seas are rough, and you are seasick the entire twenty-eight day voyage — a voyage destined to end in a ferryboat ride to a minimum-security prison on an island in San Francisco Bay. You have left your mother in Guangdong on a mission to find your father, who has not written home since 1909.  You are traveling with your “paper mom” and family friend, Chiu Wong Shee.  Together you are studying everything about Chiu Wong Shee:  her husband, Chiu Ming, a pharmacist and merchant living in Butte, Montana, and their four sons, the youngest to whom you have been promised in an arranged marriage.  The study papers are demanding in their requirement for precise and complementary answers to dozens of questions about your imagined home and family.  From the place where your grandparents are buried, to the number of oil lamps in your house in the village, to the placement of skylights in the roof of your home, to the north-south alignment of the various dwellings in the village, to the names and occupations of the men who carried your bags from your house to the riverboat in China — you study those pages and rehearse them with your paper mom, and then somewhere past Hawaii you cast your study papers out to sea, committing your adopted past to memory, and your uncertain future to dreams…

From age 11 to 15, Wong Foon Yen, known as “The Pretty One” by her neighbors, attended a school for girls in the nearby village of Dai Lock Kay.  Living the country life of a privileged merchant’s daughter in Guangdong, Wong Foon Yen was promised by her family to marry into the household of fellow merchant Chiu Ming.

As the “minor daughter of a domiciled Chinese Merchant (1)”, Wong Foon Yen possessed a magic key to Gam Saan, the Gold Mountain of California.  Wong Shee Quong’s merchant status exempted Wong Foon Yen from the Chinese exclusion laws (2).  She would legally enter the United States throughCalifornia, travel to Montana, marry into Chiu Ming’s family, and return with her husband to China after three years of profitable living in America.

In 1909, unknown to wife and daughter, Wong Shee Quong died after suffering a heart attack on the streets of Gilroy.  A large funeral procession traveled through the South Bay town to honor a man who by the local press account was both respected and liked by his peers (3).

For reasons lost in the passing decades, the news of Wong Shee Quong’s death never reached Guangdong.  It was now 1926, and no news or letters for seventeen years.  Fong Ng Mui needed closure about her husband for herself and for her daughter.  At a wife’s need to know and for a daughter’s reasons, Wong Foon Yen promised her mother she would discover what happened to Wong Shee Quong.

As Wong Foon Yen entered her late teens, agreements and plans were made between the two families for the journey to California.  With no father to speak for her, Wong Foon Yen’s original plans for emigration changed.  Her father had been her guarantor of entry to America.  With his absence, and with no other family in the States, Wong Foon Yen lost her magic key to Gam Saan.  However if Wong Foon Yen agreed to assume the identity of Chiu Ming’s daughter Chiu Yook Lon, and then joined Chiu Ming’s wife Chiu Wong Shee on a steamship to America, then together paper mother and paper daughter would roll the dice for a new life in Gold Mountain.  By accepting the challenges of tests and humiliations posed by the white demons of Angel Island, there was a chance for success in building a new life and discovering the whereabouts of a lost husband and father.

Staying in China was no longer an attractive option for a young woman with any means to get out.  The year 1925 in Guangdong (Canton) had been the worst ever.  The Strike Boycott of 1925-1926, an ideological and trade war between the Hong Kong merchants and Canton labor, had seen a near shutdown to the daily life of the British Crown Colony, accompanied by the usual violence and destruction that follows such a conflict (4).  In spite of this upheaval, Wong Foon Yen’s real mother, Fong Ng Mui, either refused to make the journey or could find no way to slip past the restrictions of the Exclusion Act to enter America (5).  Between the two of them, Wong Foon Yen as Chiu Yook Lon had a small sliver of daylight and the best chance for escape through a closing door that was the old life in China spying at a new life in California.  For Fong Ng Mui, the door was firmly shut.

The promise of another rough crossing met the new Chiu Yook Lon upon her arrival at the immigration station at Angel Island, California.  While aboard the plying steamship awaiting transfer to the ferry that would transport her and the other inmates to the Island, Wong Foon Yen received news of Wong Shee Quong’s death.  With no time to grieve, and no other way out but through Angel Island as a prisoner and a paper daughter, Wong Foon Yen committed herself to fiction and to fate.   As she walked with her baggage from the ferryboat landing to the administration building, the memories of real home and real self wore the mask of their false counterparts to become one person with a shadow life.  Remembering her true self while rehearsing a fiction, while being forced to undress with the other new arrivals for a communal medical exam, while silently rehearsing through tense and tedious days and nights, and sharing this routine with an anonymous sister-inmate from her space in a three-tier bed amidst a confluence of anxieties, emotions, regrets and second thoughts — this is how Chiu Yook Lon did her time on Angel Island.

As she waited out the countdown to her interrogation, sitting with an outward calm near a window with a view to the arrival dock at China Cove, Chiu Yook Lon kept a presence and a control within her island prison where three white men would decide the future for her.  All of her real memories of home and family were repressed and replaced.  All of her real self, out of a combination of necessity and a force of will, were now hidden in a corridor connecting Chiu Yook Lon’s mind to Wong Foon Yen’s heart.  This collaboration would suspend one identity while giving the other control, and allow inmate Chiu Yook Lon to turn the absurdities of the Exclusion Act against her captors by denying them entry to the person of Wong Foon Yen.

April 7, 1926 on the Island was a proud day for Chiu Wong Shee and Chiu Yook Lon.  Paper mother and paper daughter played their parts like a set of perfectly synchronized divers at the Beijing Olympics, eliciting an unexpected endorsement from one of their interrogators, who wrote:

“…The two applicants at this station were given a rather extended examination, the questioning covering many points not taken up in the examinations of the alleged father (husband) and youngest brother (son) in Butte, Montana…  further questioning…  would not alter the strong impression I have that the relationship claimed by these two applicants actually exists…  (Their) demeanor… their manner of testifying, appearance and the general agreement in their statements, made a very favorable impression and it is my opinion that the claims made are truthful and sincere… (6)”

Chiu Wong Shee and Chiu Yook Lon landed after five weeks on Angel Island.  They took rooms on Clay Street in San Francisco in an apartment owned by a friend of Chiu Ming.

What happens next when a future daughter-in-law becomes a present daughter?

In this case, the landlady of the Clay Street apartment appears to introduce her nephew, Dai Ho Mock, to Chiu Yook Lon.

Two months after she is landed, Chiu Yook Lon marries Dai Ho Mock.  She reclaims a small part of her first self by incorporating the phonetics of “Foon Yen” to create the name “Fern.”  The plan to return to China is abandoned, and Fern and Dai Ho Mock move down the San Francisco Peninsula to Palo Alto.  Through much hard work and sacrifice they purchase a home, raise a daughter and two sons, and witness the changes of the 20th Century through a dozen grandchildren and great-grandchildren born into lives of love and prosperity.

In the 100th year of her life, sitting at a table with photos of a mother last seen at 18 and a father she never knew, Fern Mock recalled her memories of Chiu Yook Lon, the journey to Angel Island, and the 143 questions she had to answer correctly to make a dream become real, and to create a family that would not have been had she got the answers wrong.   A 100th birthday party brought as many guests to celebrate and honor Fern.  Among those who attended was a grandson of Chiu Ming and Chiu Wong Shee.

In the early hours of a summer morning in Palo Alto 2008, Fern Mock was heard calling out to her mother, Fong Ng Mui.  And somewhere near the turning of the tide in that same summer morning, Wong Foon Yen and Chiu Yook Lon came together for a final collaboration and a great voyage.

The paper daughter of Angel Island has gone home. 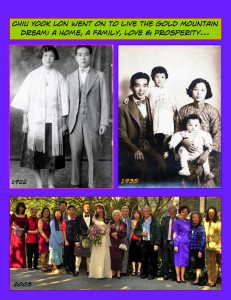 This video is at a park dedication in San Francisco in  July, 2013.  The image of Wong Foon Yen in the submitted video was chosen by Port of San Francisco to represent the face of early 20th Century Chinese immigration to the US at a bank of interpretive panels at the new park.

Shared by: William Warrior, grandson-in-law of  Chiu Yook Lon
The story was first posted at: http://roxanagraphs.us/paperdaughter1926/merchantsdaughter.html