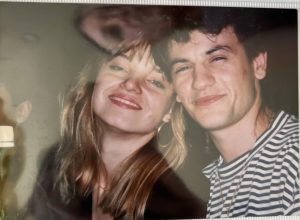 Soon after meeting in an ESL class in Chicago

Both of my parents come from the same city in Poland, so I assumed their experiences would be fairly similar based on the little information I had. Although, for this interview, I decided to sit down with my mother and hear her side of her experience, since we had never once discussed it throughout my life. Ania, my mother, was born in Warsaw, Poland, and she immigrated to the US around 1991. She began her life in Chicago, Illinois, in a small Polish community with only her mother.

I asked her what she thought about the process of becoming a US citizen, and if it was a difficult one.

Ania originally had moved to the US alone with just her mother because of her parents separation. Almost all of my mothers family still resides back in Warsaw, each sending letters and keeping contact as much as they can being as far as they are. She later on met my father in the same city she moved to in the US, Chicago, Illinois, in an English second language course my dad was also attending.

I went on to ask, what would you say was the hardest part about being an immigrant? Again, simply, she answered, “there wasn’t anything too bad that I remember when I first came here. I just remember it was so hard to go through the process of getting a job without a work permit or green card, first.” She described this process as something that was timely, a person would first have to go back to the counsel of the country, apply for a green card, retain a work permit, then wait until both were authorized so she could find better-paying jobs.

When Ania first arrived in Chicago, she was fresh out of art school and expected job-searching to be just as difficult for her in the US as it was back in Poland. “Babcia,” my grandmother, “had me helping her clean different houses for people around Chicago like she did, but I never wanted to clean or do any of that when I was younger. I wanted to paint.”

Ania soon landed a job that aligned with her major as a silk-painter for a local shop in Chicago, where she would then work there for the next year and a half. My mother had already begun picking up on some English prior to moving to the US, so she explained her expected language barrier with others to not be as difficult as she anticipated.

Ania and her mother also planned to move into a small community in Chicago known for many Polish speakers, so this brought down their worries as well. Shortly after settling down in the US, Ania had met my father around 1992 in one of her English second-language classes and that bloomed the beginning of their relationship. They were from the same Polish community in Chicago, spoke the same language, and fell in love immediately. It was a “beautiful love story for me,” as she described smiling.

She went through the process of her citizenship with my father, and they married almost immediately. All paperwork was done together, so she felt extremely supported through her process of citizenship, she expressed. It had taken her about five years to complete her citizenship as she remembers, but not once did she feel she made a mistake coming to the US.

Ania decided to move to the US with her mother to look for more new opportunities of course, and “to be able to travel around the states!” she said as she smiled. She was set on experiencing as much as the United States as she could, and there was nothing holding her back once she got there.

Her expression changed as she unlocked more memories about her time in Poland. “There was a lot of oppression and a lack of food I remember though during the 1980s, I think after that we were really just done.” I was surprised I had never heard her talk about this before. “You remember what that felt like when you went through that? Do you remember what you saw?” I replied, wanting to know more. She painted the pictures for me of how she remembers this mid-1981 widespread economic crisis and food shortage in her homeland.

“There were no clothes in the shops, and we had to line up outside around town to get food because there wasn’t enough. I remember I got so skinny I think I developed anemia!” she explained. I was shocked that something as significant as a food shortage during her life was something we’ve never scratched the surface of before in our conversations. Ania looked off, sighed, then answered my next question before I could ask. “Yeah, without a doubt it was just much better here in the US than I have ever really had back in Poland. Even though I miss my family, my life just really began here I think.” She looked back at me with a small smile back on her face but a far-off look in her eyes.

I then asked Ania if she remembers people in the US treating her differently because of her immigration status or language barrier. “Oh no!” with a small smirk forming on her face, “I actually felt a little popular because a lot of people wanted to get to know me since I couldn’t speak English well.” She replied.

What made her experience go so smoothly as she described, compared to other immigrants that come from different ethnicities or skin colors? Has she come to realizations of just how easy she had it coming to the US?

“When I lived in Poland, the only idea I had of racism or discrimination, was what other Polish people had experienced in other parts of Europe. We didn’t really talk about or pay attention to different people coming to Poland because we felt more interested than upset that they were there. When I came to the US, I think my Babcia (her mother), tried to make me feel like we had to fight for our place because other immigrants were making it worse. It was always very confusing for me, and I didn’t pay attention to her. We always had our close community in Poland, so coming to the US, everything just felt so independent and almost like a race?” Ania explained.

We both stared at each other after she responded. I couldn’t make out what my mother felt about her and how her mother had projected her perception of other immigrants onto her, so we both sighed then went on. “Do you feel that that experience with your mother, and how she responded to other immigrants in comparison to European immigrants, shaped how you view global citizenship today?” I asked. My mother pondered for a moment and took a moment to answer before explaining. “I do think that because I am a woman and because I am White, I probably had it easier than other people than Babcia made me think we did. But we worked hard to get to where we are, so I can see where she was coming from.”

“Worked hard.” It’s a phrase Americans have used for generations to describe what is apparently the “key” for the American Dream in the US. If you work hard, you will be deserving of a good life, and if you stay out of trouble, everything will fall into place and you can attain the American levels of success. This phrase can be extremely harmful when used in comparison to “which immigrant has worked hard enough to get to where they are today.” Many immigrants, especially White, European immigrants, have the privilege to believe that if you work hard, you will get success and move up in society.

My mother had never been exposed to the major issues of racism or discrimination other immigrants or people of color had experienced in relation to her own. After she had responded, we touched on why she thought others were unable to obtain the same advantages as we are able to, despite all their hard work. She looked down, then back towards me again and instead of responding she asked me, “why?”. This question allowed us to open a new door and have a discussion with not only her knowledge of the issues surrounding racism and immigration to this day, but my knowledge as well. She had never experienced anyone belittling, discriminating, harassing, or treating her unequally because of her skin color. So these issues were just something she “hadn’t really thought about, I guess” she said.

After conducting this interview with my mother, Ania, I felt as if I was able to gain a deeper understanding of not only the process of migration for European Immigrants, but of her experience as well. Growing up in my traditional Polish household, there weren’t many discussions about my parents past lives in Poland or feelings toward their migration. Both my parents were very strict and quiet people growing up, so the room for discussion about topics that touched certain sensitive topics such as this, did not come up often.

What was most important about this interview with Ania, was that towards the end of our interview, the realization and discussion of prejudice, discrimination, and privilege was finally thoroughly discussed. Since there is a slight language barrier between my mother and I, and we come from entirely different generations, my mother and I have struggled with coming to understandings throughout my life as to how White immigrants and White Americans experience, are completely different from people from other ethnicities and skin color.

As White European immigrants, they may have worked hard to get where we are today, but that does not change the reality of the fact that my mother had always been at an extreme advantage simply because of her skin color in relation to White Americans. After our interview, my mother told me that she hadn’t been asked these kinds of questions in so long, she didn’t realize just how easy she had it moving to the United States compared to others.

The interview of her mother was conducted by a student in the Bay Area.