The Adventures of Butter Nugget (Panama) 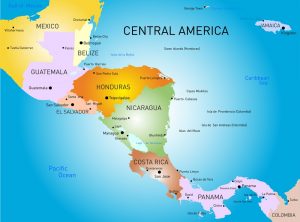 … since we were already poor we had nothing to eat almost the entire journey. Sometimes I think, why didn’t we cook the lizard?

A Panamanian family searching for a way out of poverty. Two parents, six kids, and one on the way, walking on foot to their new destiny in the U.S.A.

I watch my parents argue for a while. I’ve seen couples argue before and I don’t like how it ends, but with my parents, their issues seem to resolve themselves. I can only wish for a relationship like theirs. I hear my parents…

I watch my dad hug my mama, holding her, comforting her in the best way he can. Wiping her tears, he says, ¨Es no tu culpa¨ (It’s not your fault). ¨Esta bien, ya lo vamos a hacer¨ (It’s ok, we’re going to make it).

I grew up in Chitre, Panama, which back then wasn’t as industrialized as it is now. I grew up with my mama, dad, and 4 brothers. A little after I was born, that became 5 brothers. Of Chitre, I remember the colorful buildings the most, because my mama would walk me and my brothers around the town when my dad went to work. I remember the few meaningful feasts we would have on my dad’s pay day. I remember collecting clams and other things to help my mama make my favorite dish, seafood paella.

I loved Panama for its beautiful beaches, and even though my mama could only take us limited times, I valued every time we went. My brothers and I would run across the hot sand with our bare feet. I remember running around with the same shorts on each day. Me and my brothers had one pair of shorts each and 2 shirts. My family was so poor they couldn’t even get us in school, so me and my 5 brothers were home-schooled with the little knowledge my mama had.

In 1972, year of my birth, my family had already been in poverty, but Torrijo had just got into government, which was great for them because of the new labor code he placed. But later on, a new labor law passed in 1976 that opposed the 1972 law. Now this caused problems because it worsened Panama’s world trade. The law included a decrease in agricultural production, which made it harder for my family to live and eat, since only my dad worked. We could barely afford food.

Before I came to the U.S., I heard that it was a chance at new life. None of my brothers and I wanted to leave Chitre, but my parents always told us, “No se preocupe niños, hay una vida mejor para nosotros vivir” (Do not worry children, there is a better life for us to live).

We left Panama because we became too poor to support our family and my dad wanted to look for a new job. I was sad, but after everything I heard from my parents, me and my brothers couldn’t wait to make it to the U.S. After leaving, I missed Bellota (acorn) the most. Bellota was my pet monkey, a Capuchin. When I was 5, I found her in a basket on the side of the road, as my mama took me and my brothers to search for stuff in the streets.

Myself, 5 brothers, mama, and dad walked for months though Panama, Costa Rica, Nicaragua, Honduras, and Guatemala. Once finding out my mama was pregnant, my dad paid a guy to drive us through Mexico, and we arrived in the U.S. in New Mexico. Through the journey, all I heard was my mama crying because she thought my brothers and I weren’t gonna be able to make it.

My youngest brother, a few months to 2 years old, had gotten sick, so we made frequent stops for my mama to care for him. I remember once, when we stopped in Nicaragua, my oldest brother was trying to show off how brave he was. So while mi mama was watching my sick brother, we snuck off into some close tree area, and my oldest brother told us to look for bugs. It was so hot in the forest that we decided to take a break and rest on some rocks, but my oldest brother, determined to show us how strong and brave he was, kept looking.

We had decided that we should head back, but right before we left, we all heard a scream say, “Aye aye, ayudame,” and ran back because we knew it was my brother. To our surprise he had been bitten, right on his bum by a rainbow whiptail lizard. We were all laughing because of the look on my brother’s face. Back on our trip, we kept walking. It was hard for all of us to keep going because we were all so weak, and since we were already poor we had nothing to eat almost the entire journey. Sometimes I think, why didn’t we cook the lizard.

Arriving in the U.S. was nothing like I expected. We thought that the good life would be given to us, but we were dead wrong. My family became the poorest we had ever been; my parents had just finished paying and getting all our documents in order. We were in an abandoned house with no working utilities while we waited for my dad to get a job. After a while, we got a cheap house in New Mexico. Due to our far visual of the U.S., we wanted to stay near Mexico just in case we wanted to move back. Soon after arriving in New Mexico, my only sister was born.

Growing up in New Mexico, I met a girl who helped me in school. She was my only friend. She stood up for me when I was bullied for not knowing English, and she was Mexican so it was easy for me to talk to her. She also helped me learn English. I knew no English at all and my parents couldn’t afford to pay someone to teach me English. With the help of my friend, I learned some English. After a while, my mom learned English on her own and she also taught me. Today, her English is still a bit off. As I got older, the girl was still my friend and a little later we moved on to date, then marry.

My family decided to move to California after I got married, so we got our own house to keep in New Mexico. We later had 3 kids, one boy and 2 girls. My wife got into a car accident a few days after our last child. I was so scared of being alone and I knew I wouldn’t be able to take care of them alone, so I gave them up for adoption. It hurt me so bad, but I knew this life would be better. I wanted one thing though, I paid the lady extra money to make sure they were all adopted together. I didn’t want them separated. About a year later, I sold our house and moved back with my parents in California and I met your mama. We dated and oops … your sister was born … oops again … you came around. After you were born, me and your mama didn’t really get along well so we broke up. Tired of heartbreak, I moved back to Panama.

Today, I live back in Chitre helping my friend run his store. I live in a medium light-blue house near the center of Chitre. I have new pet Capuchin named Bellota Jr. I think I’m most sad about leaving my children. I wish I would have never done that, but I am at the same time happy, because if they had stayed with me, who knows what would have happened to them. If I had not migrated, I don’t think anything would be the same at all, and if anything, I would probably be dead right now.

This story was written by the immigrant’s son, Jhasitti Gardley.