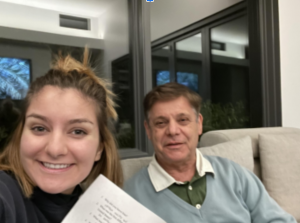 Mansour Moussavian, immigrated from Iran after getting an advanced degree at Stanford.

“I left Iran for education, advanced education in England. I then came to California to pursue  graduate studies at Stanford. Then I got a job after graduation and decided to stay because I liked the job and the location”. These were the formal reasons he left and if it weren’t for the idea of  pursuing a higher level of education, he would have most likely stayed in Iran and have never  immigrated.

“Leaving my family behind”.

“Professional success and enjoyment of the weather. I feel like there is no limit for what a person can achieve if they put their mind to it and try hard enough. For example, you can take classes at  any community college whereas in Iran you have to apply”. In Iran it is quite rare for someone to  attend “community college” since it is looked down upon. 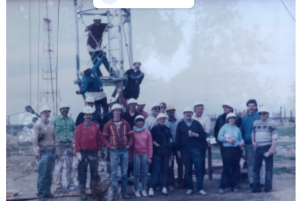 he’s third from the left in the red sweater, this is at his first job

“My regret is that there are some of my relatives that I haven’t seen for over 40 years. I have also  missed places I grew up and relatives that have passed before I got a chance to say goodbye”.

“Trump’s Muslim ban has prevented some of our relatives from visiting us here”. This is true for  several Muslims across the country and the irony is that there have never been terrorists from the majority of the countries that Trump banned. Saudi Arabia for example is where Osama Bin Laden was from, yet Trump allows visitors from there because he has businesses and companies  in Dubai.

“I’ve lived here for so long so of course I feel welcome, it’s my home!”

“I think the thing is you have to have a five year plan, ten year plan and a long term goal for your future which I had. You have to act on it by putting your mind and effort in it. No goal worth achieving is easy to achieve or reach”. He didn’t have any advice because he wouldn’t change  anything about his life today.

“Their brain, hard work and loyalty. They came to this country from across the world by choice so obviously we love this country.”  From the way he responded to this question it was clear that  he felt strongly about the positive impact that immigrants have on the United States in general.

Mansour was interviewed by his daughter, a student at Foothill Community College.